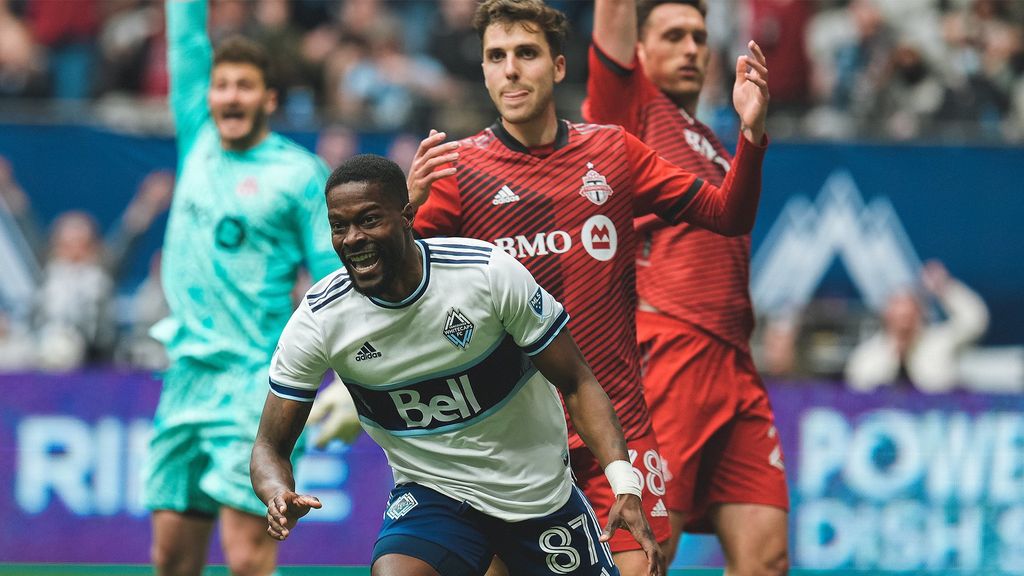 VANCOUVER – The halfway mark of the 2022 MLS campaign is starting to approach rather quickly here.

Most teams have played 13 to 14 regular-season games so far, representing around the 40 percent mark of a 34-game MLS season. That means that most MLS teams are just three or four games away from reaching the halfway point, a crucial landmark in any team's season.

We're on some time off now as the league currently waits on the international break, which means that this next stretch will be crucial for most teams on that playoff line bubble, as they find out if they're contenders or pretenders and ultimately defining if their 2022 campaigns will be a success or not.

So for the three Canadian MLS teams, this is a good chance to reset and see how things are trending ahead of that midway mark.

We'll break things down by the good and bad, before finishing with one phrase to sum up their start to the year so far.

There’s a lot to like right now with CF Montréal. Currently third in the Eastern Conference, and seventh in the overall Supporter’s Shield race, they’ve been in excellent form, having picked up points in eight of their last 11 MLS games, six of those being wins. On top of that, they’re also into the semi-finals of the Canadian Championship, too, as they look to nab their second consecutive title, and third in the past four years.

Plus, they’re fun to watch, sitting tied for second in the league in goals for, and have a deep team filled with all sorts of talent, including early league MVP candidate, Djordje Mihailovic, as well as the reliable Victor Wanyama, the mercurial Romell Quioto and more.

You add in the contributions of Canadians, which include Sebastian Breza, Joel Waterman, Kamal Miller, Alistair Johsnton and  Ismael Koné, among others, and things look even better, too.

And it’s not as if Montréal have been riding their luck, either, as they’re currently fifth in MLS in Expected Goal Differential (xGD), sitting with the fourth-best xG against, and 11th best xG for, showing how good they’ve been.

Because of that, it’s really built up a good feeling around this Montréal team. Supposed to still be rebuilding at this stage under second-year head coach, Wilfried Nancy, they’ve instead proven that they’re more than ready to contend, now, and the results back that up.

At the same time, things haven’t been all rosy for Montréal. To start, there was the damage that an early run in the CONCACAF Champions League did to them, leading to a nightmare start to their MLS season, one that they’re still feeling the effects of.

Plus, they’ve continued to deal with all sorts of injuries and suspensions, making it hard to get their best players all out on the field at once, which is never ideal, even if their depth has mitigated this issue significantly.

And for all of the fun that they’ve had in terms of scoring goals, they’re actually struggling hard defensively, sitting third-last in goals against, underperforming their xG against by 0.69 goals, which is quite tough.

So while things are fun for them now, if they don’t tighten up their defence, that could cost them, especially in big games, where things tend to be a bit cagier, meaning that games could be decided by mistakes, something Montréal has made their fair share of defensively.

IN ONE PHRASE: There’s no doubt that the good leads the way for Montréal right now, and by a significant margin. Therefore, the phrase of choice?

For a rebuilding team, one of the youngest in MLS, Toronto have been a lot more competitive than many expected, especially against some pretty good teams.

Led by one of the top scorers in MLS, Jesus Jimenez, and supported by a solid cast of veterans, such as Alejandro Pozuelo, Michael Bradley, Jonathan Osorio, Alex Bono and Carlos Salcedo, there is still a good core of TFC players, which is only going to get stronger when Lorenzo Insigne comes in.

Plus, they’re surrounded by a solid cast of kids, including Luca Petrasso, Kosi Thompson, Deandre Kerr, Jacob Shaffelburg, Jahkeele Marshall-Rutty, Noble Okello and Ralph Priso, among others, all of whom have played different but important roles on this team.

And, most importantly in a rebuilding situation like this, they’re still fun to watch, sitting in the top 10 in goals for, showing great things offensively on a regular basis, making sure that the fans that see them aren’t left wanting in the entertainment section, if anything.

“I know how special the tournament is. I know how serious teams take it. I know how much it means to the fans… These are special nights and so we’ll use this one in a good way as we continue to move our team forward.”#CanChamp | #TFCLive

But for all of the positives, it’s also important to remember that at the end of the day, Toronto is still a rebuilding team, something that does manifest itself in other ways.

For example, they’re actually second-last in goals against, and are dead-last in both xG for and against, meaning that they’re generating and conceding chances at a bad rate (but are at least finishing their chances at a pretty solid clip).

Plus, they’re yet to really settle on a best formation or starting lineup, as head coach Bob Bradley, who is in his first season with TFC, continues to take stock of what’s available to him.

Already short a few key players from being the best and final version of themselves, they’ve also been hit hard by injuries, which has most definitely not aided the cause, either, showing where they still need to bolster their squad once Insigne arrives.

And speaking of which, his arrival is the biggest question mark of them all. Arriving after a long European season, already dealing with a knock, will TFC be able to provide him with what he needs to succeed in year one?

Ideally, the plan was probably to use this year as a tester, before letting him run free after a full offseason (one with no World Cup) in 2023, but given his salary, people will be keeping a close eye on him this year, only adding unnecessary pressure to the rebuild.

IN ONE PHRASE: So overall, things aren’t actually that bad for TFC, but just need a bit of context. Because of that, their phrase of choice?

Bob the Builder is just getting started.

Lastly, there’s the enigmatic Whitecaps, who after a nightmare start, have been one of the hottest teams in MLS as of late, sitting second in the league’s overall form chart as of writing.

But that shows how things are going for the Whitecaps, who have climbed up to 10th in the West, just one point off the playoffs, and into the semi-finals of the Canadian Championship for the first time since 2018.

Led by the fantastic form of Lucas Cavallini, who finally looks like a $5 million player, and led by the solid contributions of Ryan Raposo, Sebastian Berhalter, Ranko Veselinovic and Cody Cropper, among others, Vancouver has done well to flex their depth as of late.

Which, is scary, as they’re still yet to see the best play from their DP #10 Ryan Gauld, as well as Cristian Dajome, Deiber Caicedo, Pedro Vite, Erik Godoy, Caio Alexandre and new signing, Andres Cubas, meaning that far more could still be to come for Vancouver.

Plus, they’ve been fun to watch as of late, especially at home, where they’ve been a top 10 team this season, creating a much-improved vibe around the team, who are playing like a loose and relaxed bunch again.

What a difference a month makes for #VWFC

All of a sudden, they're just 1 point off the playoff line with this win, another one where they've clawed things back late. You add in the fact that they're also into the SFs of the #CanChamp, and this 2022 campaign is shaping up nicely

But for all of the optimism of the latest run, as well as the return of several key players, there are still more questions than answers with this Whitecaps team right now.

For example, on the season, they’re actually in the bottom 10 in both goals for and goals against, meaning that they haven’t exactly been riding a great formula to success. Especially when you consider that they’re bottom 10 in xG for and against, and are just on the edge of the bottom 10 in xG difference, the advanced stats don’t look pretty for them, either.

You add in their struggles on the road, as they’re in the bottom six in road form, and have just four road wins in MLS since MLS is Back in 2020, that’s also not playing in their favour, either.

As a result, it’s really felt like the Whitecaps have been riding the finest of margins all seasons wrong, which explains why they started so cool, and have been so hot as of late.

And seeing that they’re not even in a playoff spot right now, the idea of them regressing to a mean is scary, just showing how much work they have to do in order to make the playoffs.

IN ONE PHRASE: Overall, while the cons are a worry, given how the team finished the 2021 season, this does appear to be the closest version to their best selves, and considering new reinforcements are coming, that does hold room for optimism - for now. Because of that, the phrase?

Still on the hunt for Gauld Gold.