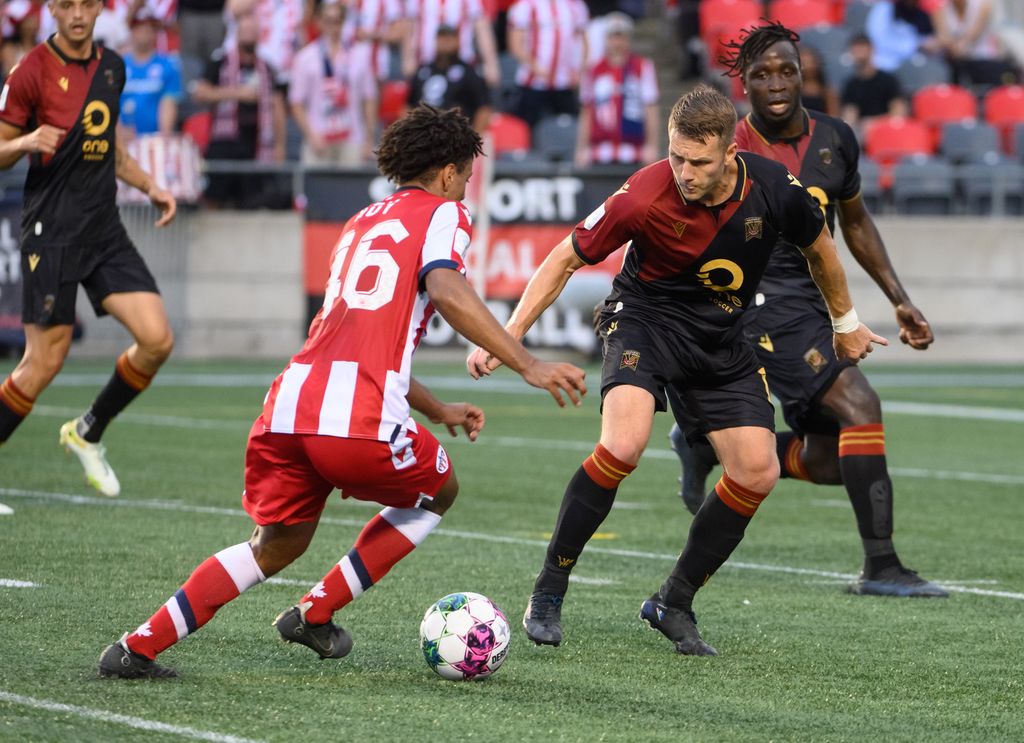 VANCOUVER – Having crested the midway point of the 2022 Canadian Premier League season, the stretch run is getting set to begin in earnest this week.

Forge kicked things off with a huge 2-1 win over Cavalry FC to lead into a big weekend of games headlined by another Hamilton vs. Atletico Ottawa battle. Things are really heating up in the CPL's playoff race, as such.

With just 14 to 11 games remaining for each team in the league, things are as tight as ever in the push for the playoffs, with the top three teams all tied at 29 points, and fourth-placed Cavalry only one point behind.

Plus, with a lot of six-point games left to play, a lot of these battles could go down to the wire, especially given how even the competition has been between first and sixth. There's a lot more table movement to come in the story of the season.

So as we get set for the weekend ahead, here's a look at each of the eight CPL teams, and what to make of them ahead of this run, before finishing with one question to ponder for the rest of the campaign.

It's been business as usual for Forge this season, who have seemingly cruised to where they are in the standings, sitting pretty at the top with 1-2 games in hand on the other three teams on the right side of the playoff line.

But this hasn't been a season of clear-cut domination that Bobby Smyrniotis' side usually displays. Instead, Forge's rise to the top has been more subtle. Because of that, it feels assured that they're well on their way to booking a ticket to another playoff appearance, and potentially even a fourth-straight final.

KYLE BEKKER with some @ForgeFCHamilton MAGIC, giving his team a 4-0 lead over @FCEdmontonNow directly from the corner kick #CanPL | 👉 https://t.co/hishXepRT3 pic.twitter.com/N9FPNDgChG

Having had to suffer the bitter taste of losing to Pacific FC in last year's final, the two-time champions will want to avoid a similar fate once again this year.

And given that they've so far amassed the most goals for in the league, while conceding the fewest, they've been playing like that is the case so far, making them a team to fear.

They're very much favourites to top the regular season table and do well in the playoffs, as they look to reclaim their CPL crown.

1 question: Is it enough to clinch a playoff spot, or is top-of-the-table also a priority?

Things are looking good in the nation's capital. Sitting in 2nd having beaten every team in the league once, they've become a team to fear, finally taking the step forward many have been hoping for them to take.

They might not score as many would expect, sitting with just 19 goals in 16 games, but with 5 goals against, they've been tough to break down defensively.

Another CPL match, another banger!!💪@atletiOttawa opens the scoring vs. @ForgeFCHamilton as Ollie Bassett scores a beautiful goal from a free kick! THIS MAN CAN'T BE STOPPED!🔥#CanPL | 🔴 https://t.co/7JFAUhgjL6 pic.twitter.com/8E3qke5uJA

Plus, with the best road record in the league, picking up 17 points in eight games away from TD Place (5W-1L-2D), they've managed to keep a solid identity away from home, as well.

So as Carlos Gonzalez's side gets set for the stretch run, don't be surprised if they end up making the playoffs rather comfortably, continuing a dream run for them.

The defending champions, things are still going very well for the Islanders, who sit third but tied for first in points with Ottawa and Forge. Despite a tough rough patch in June and July, a strong start and a recent resurgence has kept them in the top four all year long, as they look to try and do some more damage in the playoffs.

Sitting with the third-most goals, they've been a fun unit to watch offensively, but have had some hiccups defensively, especially as of late, sitting in second-last, in that department.

Manny Aparicio (who is 5'8" btw) scores ANOTHER header goal, leaping high above his mark to give @PacificFCCPL a 1-0 lead over @HFXWanderersFC in the 25th minute #CanPL | 🔴 https://t.co/7JFAUhgjL6 pic.twitter.com/2qJc4S382k

But with the best home record in the league, and a penchant for the big games, that's allowed them to get to where they are right now.

So while it'll be tough for them as they navigate the challenges of juggling Concacaf League duties, look for them to be among the final four when the fall rolls around.

1 question: Can the defending champions stay ahead of the curve?

It's been business as usual for Cavalry FC this season, who continue to be a team to beat in regular season action, sitting fourth and just one point back of the three teams ahead of them at the time of writing. They've dipped a bit as of late, and will want another go at Forge despite punishing the visitors with an early goal, but have overall been a tough nut to crack, at one point going on an 11-game unbeaten run in CPL action.

Sitting with the league's second-best offence, they've racked up points in pretty fun fashion, too, all while keeping the third-best defence, ensuring that the fun doesn't come at a cost to their defensive solidity.

Another game, another beauty, as Myer Bevan stuns #VWFC to give @CPLCavalryFC a 1-0 lead in this #CanChamp QF 🇨🇦🏆

You add in their tactical versatility, and strong record both at home and away (plus they have a whole host of home games coming up), and things are looking good for Cavalry to make the playoffs once again, where they'll look to finally get over the elusive bump that winning it all has been for them.

1 question: Does this team have the longevity to compete all the way to the final?

Things have been coming along nicely over in Winnipeg, as Valour has now pushed up to within six points off of the playoffs, doing well to really find their form as of late.

That's why if there's a team that can currently disrupt the Ottawa, Cavalry, Pacific and Forge top four, Valour is a potential option, as they've been a tough nut to crack. With the fourth-best goals for and fourth-best goals against, they've certainly had moments where they can be a playoff team, especially when they're at their best.

SIX for @ValourFootball vs. @AtletiOttawa and it's ANOTHER #CanPL BEAUTY 💥

Seriously, what is with this league!? BANGERS. ONLY.

They haven't been as good at home, unfortunately, which has hurt them a bit, but with a whole host of home games coming up, they do have a chance to change that, making them a team to watch in the stretch run.

1 question: Can Valour exert control of their fate and come together for a proper playoff push?

It's been a strange season over on the Atlantic Coast.

Overall, the sixth-placed Wanderers have been solid. With a record of 5W-8L-3D, they've had their flashes, but they've also equally had their rough moments, leaving them to sit eight points adrift of the playoffs.

Of course, injuries and other absences have hurt them a fair bit, but even then, they still have a solid roster.

The biggest thing that has dogged them, however? Their usually dominant home form, as they've picked up the second-fewest home points this season, and haven't been good enough on the road to make up for it, something that they'll need to change in the second half of the season.

SAM SALTER 🤯@HFXWanderersFC draw level 1-1 vs. #TFClive in this #CanChamp clash from a MAGNIFICENT goal from the Canadian forward 🇨🇦#CanPL | 🔴 https://t.co/7JFAUhgjL6 pic.twitter.com/1Q0qegRkNR

Otherwise, figuring out a regular source of goals (they sit second-last in goals for), and tightening the defence (they're tied for third-last in goals against) could be a big way to help them, especially at home, where they have a -7 goal difference.

1 question: Have deeper issues begun to emerge at Halifax, with home form dipping?

It's been a tough year for York United, as other than their prowess in the Canadian Championship, they've had a pretty forgettable season of CPL action, which is why they sit seventh, just three points ahead of last.

When they're on, they can be tough to beat (the fact that their three victories this season are against Forge and Cavalry (x2) shows that), but that hasn't often been the case.

And just like that, @YorkUtdFC take a 2-1 lead over @PacificFCCPL via, you guessed it - Osaze De Rosario! 🇨🇦🏆

They are a solid defensive unit, sitting with the fifth-best goals against, helping them be competitive in most games, but their offence has let them down heavily, as they have a league-low 10 goals through 17 games.

Because of that, York look like they'll come up short in trying to return to the playoffs, after having done so well to qualify for the first time last season.

1 question: What will it take to untap the full potential of a team of talented young attackers?

Nicknamed FC Opportunity at the beginning of the season, their opportunities to win games haven't always been there, but they've certainly grown and made the most of the opportunity given to them, making them an intriguing team to keep an eye on.

So while they still sit last in the league (albeit just three points off seventh), there's no doubt that they'll be a team to watch in the second half, even if the playoffs are most definitely out of their reach.

GOAL OF THE SEASON ALREADY!!🐇

They're actually tied with Ottawa in goals for in fifth, and while their defence has struggled, with their 34 goals against being far and away the worst mark in the CPL, they've had a few blowouts to inflate those numbers.

Therefore, while the playoffs won't be coming to the city this season, keep an eye on them as they try to spoil the playoff picture, something that a win over Ottawa and draws with Valour (x2) and Pacific have already done.

1 question: What does the future hold for FC Edmonton, on and off the field?