'Without the CPL I don't get this move': Marco Bustos on signing in Swedish top division 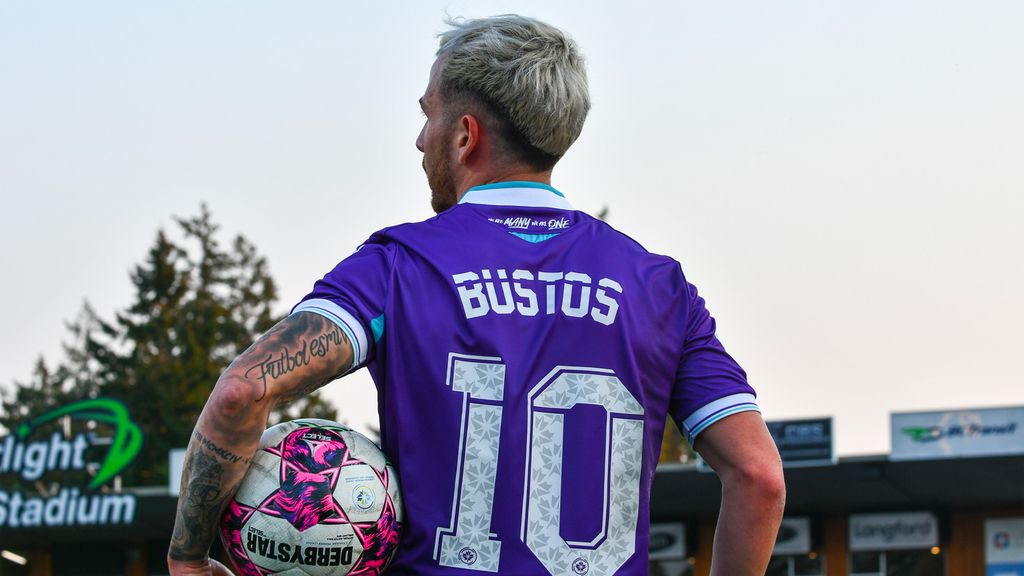 Marco Bustos came to his family’s Christmas celebrations this year with a list. Not of gift ideas, as is ordinarily the festive custom, but of clubs who were interested in the 26-year-old attacker.

On Christmas Day, the Bustos family sat around and discussed the multiple offers, both domestic and abroad, that Marco had received. After four seasons spent playing in his home country in the Canadian Premier League with Valour and then Pacific FC, he came to the decision that it was time to test himself abroad.

The Winnipeg native is headed to Sweden, having signed with Allsvenskan (the Swedish top flight) side IFK Värnamo.

"I always said I didn’t want to play in Europe just to say I’m playing in Europe," Bustos told CanPL.ca this week. "If I’m going to go there to a team where I’m not going to contribute and just have my name in the roster, that to me is not successful, and that to me doesn’t give you an opportunity or a chance to be successful. I didn’t want to go to a small league. So I had to stay patient."

A free agent after the 2022 Canadian Premier League season, Bustos quickly began exploring his options. In early November, he joined Toronto FC for a week as the Major League Soccer club wrapped up its last week of training for the season. It was an opportunity to test himself alongside some world class talent, a few of whom were headed to the World Cup with Canada a month later.

"It was a great experience to be around those guys," said Bustos, "just seeing Lorenzo Insigne up close, seeing what his touch was like and all of that."

What the opportunity also showed Bustos, however, was that he was still certainly more than capable of playing at that level. 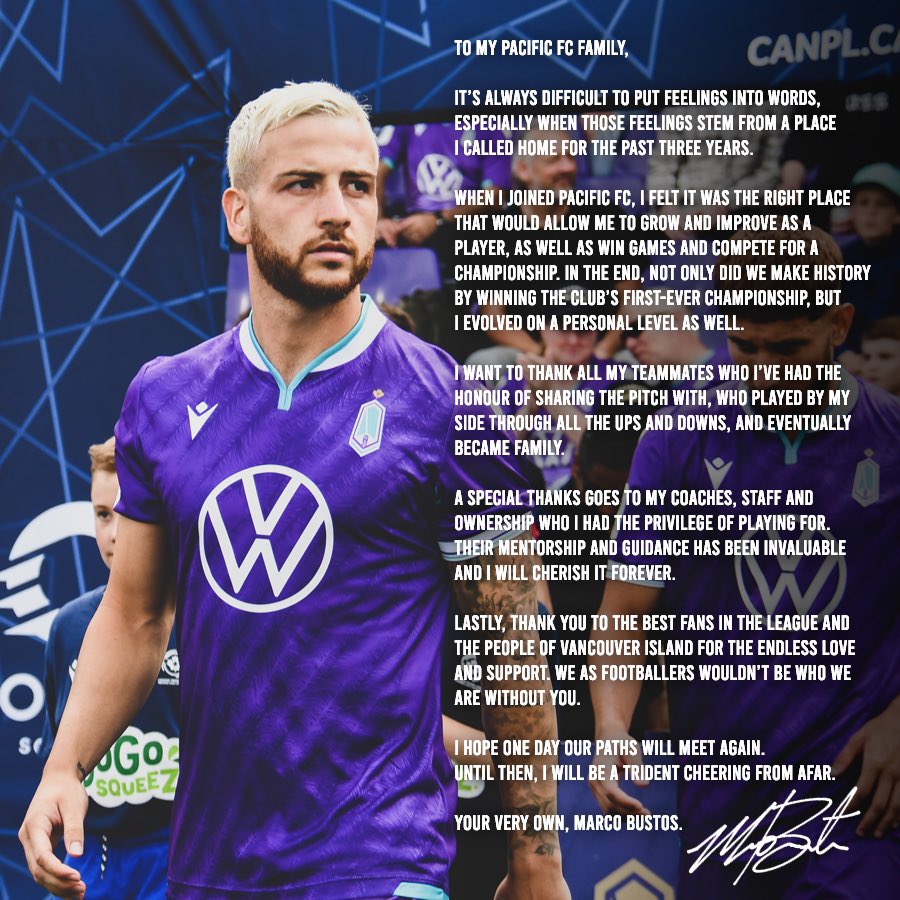 Over the next two months, he would receive a number of calls, from multiple CPL coaches as well as a handful of teams in Europe interested in his services. Pacific FC showed significant interest in keeping their star player as well.

"Maybe two weeks before Christmas there was a span of five, six days where four teams came with concrete offers and I was kind of a little bit overwhelmed," said Bustos.

What came next was the process of finding which team was the best fit for his abilities. That involved a number of Microsoft Teams calls — he said with a laugh that Zoom is less popular in Europe — to get a better idea of what each team was offering. IFK Värnamo’s presentation quickly stood out from the others.

"The detail, the pathway, the energy that they had about wanting to bring me in and how they would use me and how they played," said Bustos. "It all fit into what I wanted."

Just as important to Bustos as location was how each team played. Knowing his on-ball abilities, he wanted to join a club who would play with possession and would allow him to play his dynamic attacking style and set him up for success.

It is a style of play with which Canadian Premier League fans will have become plenty familiar. Bustos departs the league having recorded 21 goals and 18 assists, the fifth- and second-highest totals posted in league history, respectively. 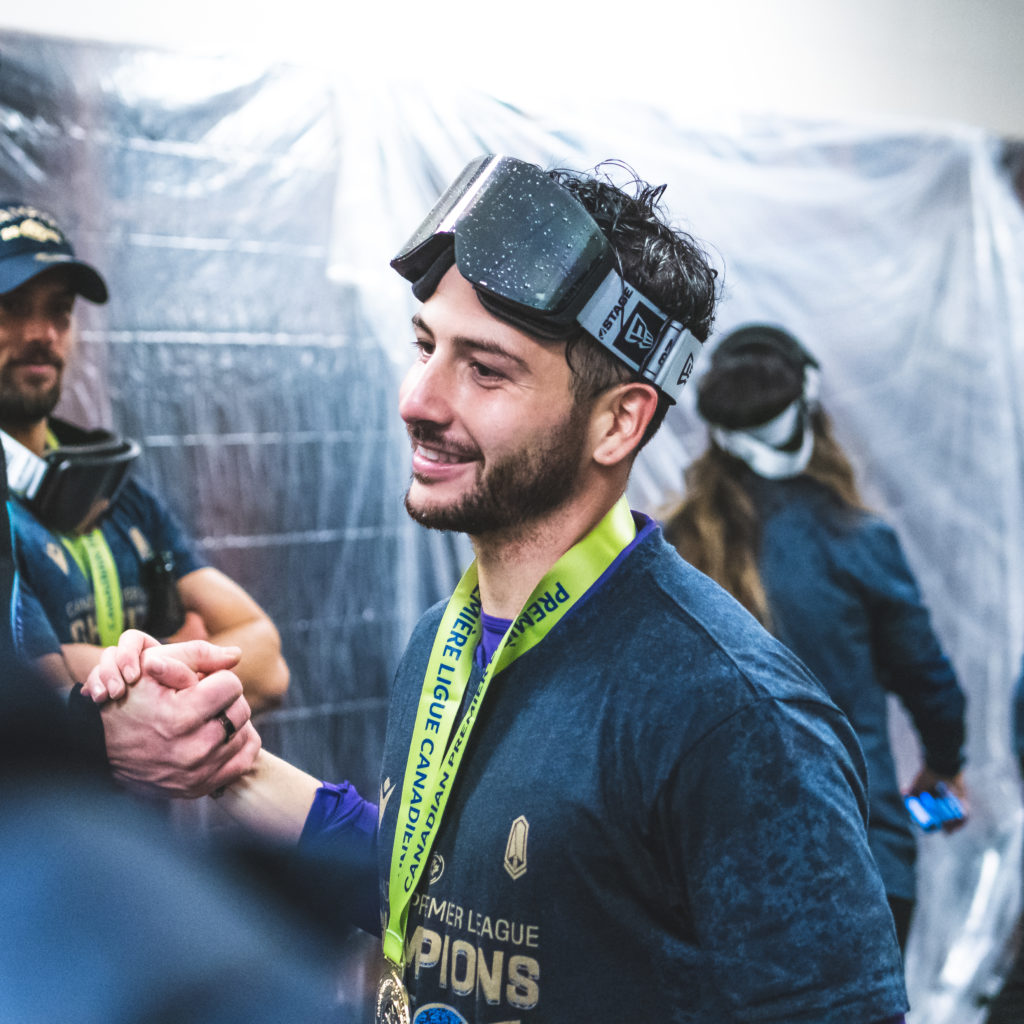 Playing as one of the key players on the pitch allowed him to develop his game in a different way. He was often double- or triple-teamed on the ball, which forced him to think more quickly and adapt to find spaces on the pitch.

“Without being in the CPL I don’t think I would get this move,” he said.

“It revived me, it allowed me to see the value in myself again. Once leaving the Whitecaps I kind of got lost in a ‘Where do I end up? Where am I going? Where is my career taking me?’ I kind of went on a two-year pause. Then obviously the league came about and I wanted to come here and make a difference and show the Canadian market again what I can bring.”

Bustos spent the last three seasons with Pacific FC, winning a CPL championship with them in 2021 — a moment that he says will stay with him forever. He was also part of Pacific’s first-ever Concacaf campaign, as well as their first home playoff game this past season.

“I’ve created a lot of history here on the Island with Pacific and like I’ve told the people close to me this has been the funnest three years of my career so far,” said Bustos. “I can’t thank the people enough around me who helped support me to flourish in that way and put a smile on my face while being at the club. That is from staff, to coaches, friends, teammates, just so many lovely people that opened their arms for me and I am thankful for that.”

Now he is motivated to show the rest of the soccer world the calibre of players that Canada, and the Canadian Premier League, can produce. He says that this move to Europe will hopefully open doors for him in his career, with one door in particular at the top of his mind.

“Being in a top division in Europe, there is that national team door that I’m wanting to knock on again and with that move, if I have continued success and do well then I’m right there,” said Bustos.

He knows it will take plenty of work and consistency to get there but his belief in himself has never been higher. He has finally made his dream move to Europe, and now he says, it is time to work hard and enjoy the moment.