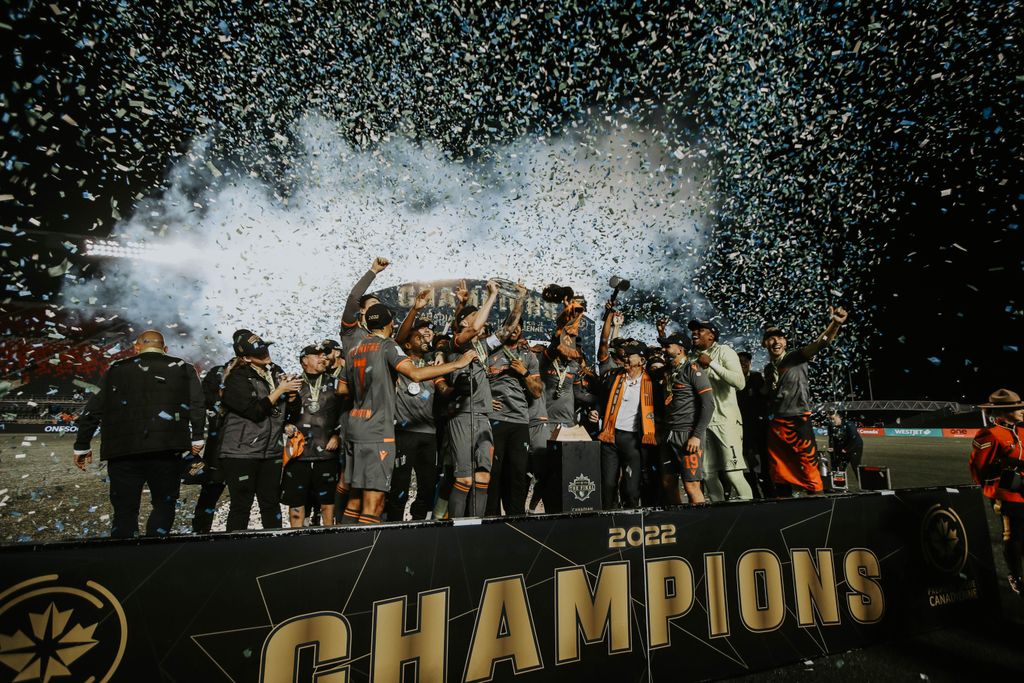 OTTAWA – Forge FC is making a real habit of this.

The 2019, 2020, and now, 2022 Canadian Premier League champions once again lifted the North Star Shield, making it three trophies in four seasons since the inception of the league – and if you're looking for recurring themes, a look at the scoring sheet tells a similar story.

Take, for instance, Alessandro Hojabrpour's story. Just one year removed from winning the CPL Final with Pacific FC against Forge – a game in which he scored a thumping set-piece to win his team their first-ever title – Hojabrpour mustered exactly the same effort off a cross hurtling towards his head in the 28th minute of Sunday’s 2022 final against Atlético Ottawa.

Now playing in the heart of Forge's midfield – yes, the very team he helped beat in the 2021 final – Hojabrpour's goal proved the difference once more, and right on time, too: Despite having just four CPL goals to his name in his 86 previous games, he rose high and carefully extended his neck, nodding home at the near post to give Forge a crucial 1-0 lead against Ottawa. It would prove the eventual game-winner.

Could this be the North Star Shield winning goal?🍁⚽️#ForOttawa | #ForgeFC

A hardworking midfield engine known for his ability to cover ground defensively, Hojabrpour can now count back-to-back trophy-winning goals on his resume – not a bad thing to add for a 22-year-old.

"It feels great," Hojabrpour told OneSoccer shortly after the game. "There's not much more you could ask for, really. To play in as many finals as you can as a young guy, and to win two years in a row, it's unreal."

It’s safe to say that any sore feelings of 2021 from his new teammates – surely unlikely, but perhaps emerging via gentle ribbing – have now been erased entirely. Given that Forge had surely set out to get an early goal and silence the 15,000-strong Ottawa crowd (as well as unsettle a rock-solid Ottawa defensive line) Hojabrpour's goal came just in time, too.

"Ah, I think I owed Forge one from last year," Hojabrpour said with a sheepish laugh. "I like the big moments. We live for them. I'd say, at least in my head I like to prepare thinking that, so it's perfect that the ball happened to get onto my head like that... again.

"At half time, we were saying 'How is this possible, how did the same thing happen twice?' – but hey, that's football!"

Forge winger David Choinière added: "It was kind of crazy, because when he scored that goal, I was like 'Hey, this is the same goal that he scored against us (in 2021). It was the perfect way to start a game; we knew how much that first goal would mean to us. It allowed us to control the game afterward."

In a sense, it was fitting that Hojabrpour was the first to breach the target, though Forge is a team filled with players like him who are happy to step up in the biggest of moments. It's why head coach Bobby Smyrniotis had no qualms issuing a clear message of confidence ahead of this final, telling reporters that real pressure is "playing at the Azteca in front of 55,000" – a boast, perhaps, of just how much big-game experience Forge has amassed over the years (and a dig, perhaps, at how little Ottawa has, too).

When it comes to these moments, Forge FC know how to deliver.

Consider their second goalscorer, Choinière, as an example of how this team seems to shine in the face of heightened adversity. With his team starting to feel a bit of Ottawa's desperate pressure in the second half, and having just faced a couple of their best chances of the game, it felt like Forge were minutes away from potentially bending past their breaking point.

Instead, up stepped Choinière – Forge's "King of Clutch" – who, with a magical dribble and finish in the 78th minute all but put those doubts to rest, securing the victory for their team and deflating their opponents at the perfect time.

It was Choinière's ninth non-regular season goal for Forge, as well as his second CPL Finals goal – and it was a play that saw him almost will his team across the line. In an almost out-of-body-like experience, Choinière once again allowed a decisiveness to take over his footwork, and from there, he executed with the sort of ruthlessness that distinguishes the best players from the rest.

With that, Forge capped off another season to remember for the city of Hamilton. Not only did they get back to the top of the mountain after suffering heartbreak in 2021, but they did so while playing the way that they wanted to play – the Forge FC way.

In a sport where pragmatism and a desire for safety can take over in these biggest moments, Forge has yet another reason to head home to Hamilton with pride, alongside their third league trophy. This team endured a longer-than-usual campaign due to Concacaf Champions League obligations, while having to manage a big number of injuries and suspensions to key players.

Even in this final, where they were missing captain Kyle Bekker due to a red card, Forge found a way to step up.

"The biggest thing is the football we played today," Hojabrpour explained. "It's much more fun when you get into the big games and you still try to play the same attacking style of football. It's a lot of fun, and you feel a relief-like feeling when you win, as you know that all that hard work you put into attacking paid off. When you put it into that style of play, it's satisfying."

Choinière added: "It’s been a tough year, for sure. A lot of people doubted us, so to overcome that in a great way as we did, I have to say congrats to the guys. I'm proud of them. We had an amazing season, and I can’t wait for what's next."

From Hojabrpour and Choinière combining with the electric Tristan Borges and scoring clutch goals, to the likes of Daniel Krutzen, Aboubacar Sissoko and Alexander Achinioti-Jönsson showing Ottawa what their unbending backline can also do, Bekker's absence was more than accounted for on the night.

"On a day like this, you need guys like them to be good, especially on the ball and in attacking moments," Smyrniotis explained post-game.

Now? Forge can do something they've long waited to do – rest and recover.

The three-time champions head home with the comfort of knowing they've completed their mission again.

After joking the day before the final that he already 'sleeps well' with two North Star Shields hanging over his bed, what does the off-season look like for Smyrniotis now?

"Oh, I'll be sleeping for two days straight after this," Smyrniotis said with a laugh.