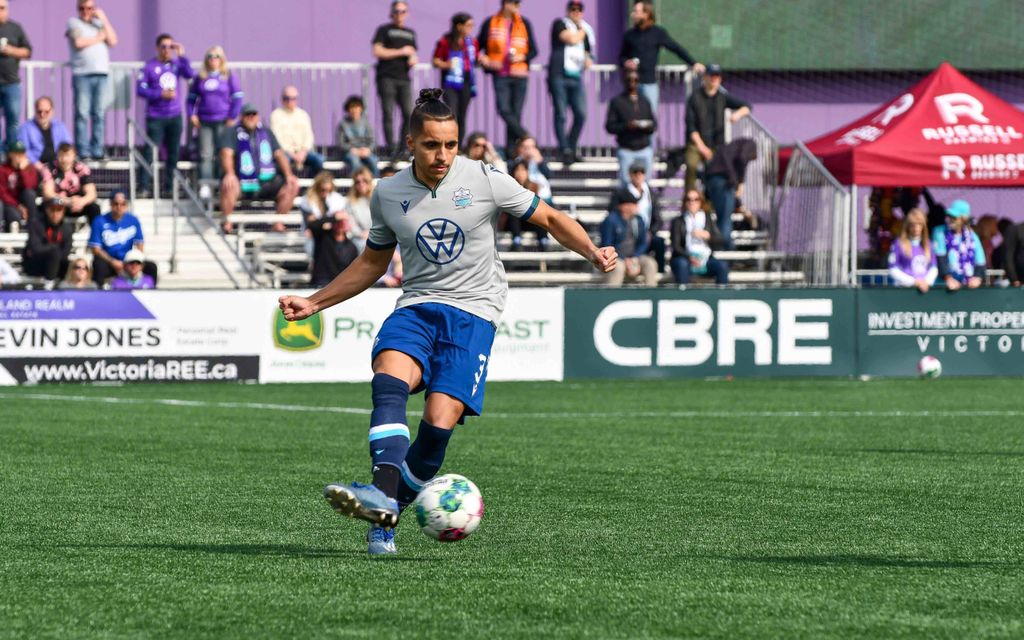 After a terrific performance against FC Edmonton over the weekend, 20-year-old Zachary Fernandez of HFX Wanderers might just have announced himself as the heir apparent to that list. In fact, Fernandez even shares an origin story with a pair of those aforementioned names, having come to Halifax via the same A.S. Blainville (PLSQ) side for which Farsi and Abzi once suited up.

Fernandez was central to almost everything Wanderers did offensively during their home opener, assisting on the game-winner before winning a late penalty. The 3-1 win was just the third time in franchise history that the club has scored three or more goals in a match.

“I think Fernandez was fantastic,” Stephen Hart told the media after the match. “Fantastic. Defensively, and in offence, he was fantastic. Once he learns to deliver that final ball maybe a little bit earlier, or be a bit more patient and look for somebody in the box rather than just whip it across, I think that boy has a big future.”

Fernandez’s shining moment of the match, and his season to date, came on an assist early in the second half. It was an example of the boundless potential that the young fullback possesses.

Recognizing that Halifax was secure in possession, Fernandez (number 3 in the clip below) pushed up his flank and snuck behind the FC Edmonton backline. His cushioned header to Samuel Salter was inch-perfect, allowing the HFX striker to take a touch before slotting the ball past Andreas Vaikla.

It appears as though Fernandez has been given full licence to make those forward runs. When he does, Jérémy Gagnon-Laparé, who has spent time at fullback himself during his career, tends to slide over to cover the vacated space further allowing Fernandez to attack without reservation.

That ability to get goalside of his opposing defender and his ability in tight spaces have made him a handful for opponents so far this season, quite literally. Fernandez has been one of the most fouled players in the league in 2022, winning nine total, including four against FC Edmonton alone.

With that being said, there are times this season that Fernandez has had some difficulty adjusting physically to the league, which can hamper his defensive game. Facing York United in the season opener, for example, he only won three of the 12 duels he contested. Against a young Edmonton team, however, he showed signs of improvement winning 10 of 13 duels.

His defensive anticipation is also excellent, as evidenced by the clip below. Fernandez sees the aerial ball coming forward, and puts himself in a good position to simply dispossess Terique Mohammed who is still trying to get control of the ball. He leads all HFX players with nine interceptions this season.

Other than his marauding runs forward off the ball, Fernandez tends to play the position very traditionally. Against FC Edmonton, he mostly to stuck to his flank and used his close control and intelligent runs to make space for himself rather than cutting inside, as his heatmap demonstrated.

With this in mind, and as noted earlier by Hart in his post-match comments, Fernandez’s crossing ability could still use some work. He had four total unsuccessful crosses against Edmonton, which has been a bit of a theme this season. As his coach correctly assessed, his final ball often tends to be rushed, more to an area than an actual target.

That will come with experience, and the more he can get himself into those dangerous positions, which he has consistently done this year, the more he will learn to connect with teammates. Having played just four matches with his new teammates, he still has plenty of time to study their attacking tendencies as well.

His crosses from open play can still leave something to be desired, but Fernandez does have one final weapon in his arsenal. He showed off an incredibly accurate long throw-in against FC Edmonton that might well be used by HFX to generate more attacking opportunities in the future.

While it remains to be seen if the Canadian Premier League has its next Nico Pasquotti, Fernandez possesses all the abilities to be its next elite fullback.