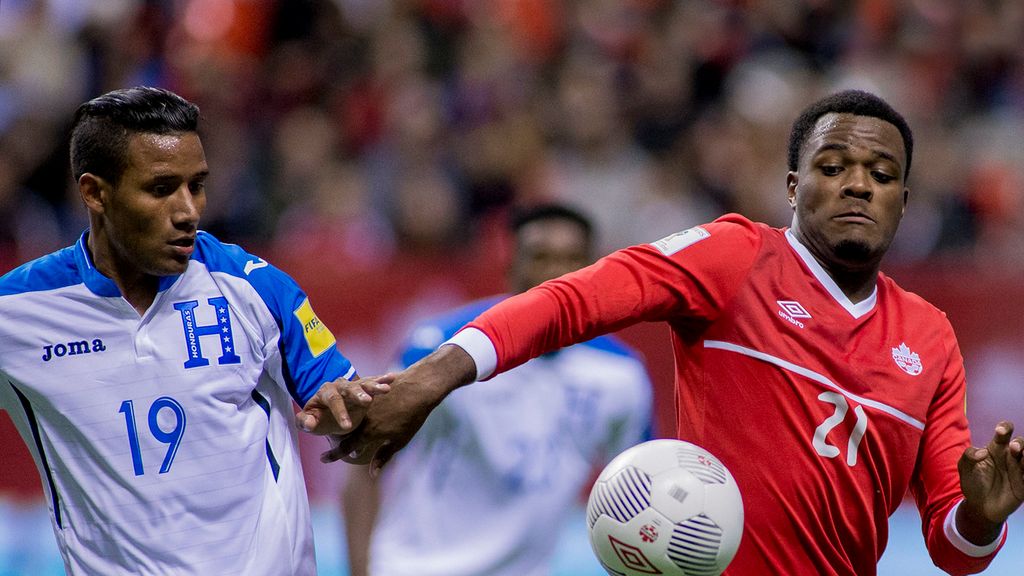 A trip down to the Estadio Olimpico Metropolitano in San Pedro Sula, Honduras isn't exactly rife with fond memories for the Canadian men's national team.
Quite the opposite.
But, have no fear - a new-look Canada is here, ready to embark on this dreaded away trip once again, though in much happier spirits as Les Rouges lead the Octagonal table in Concacaf World Cup Qualifying.
The 42-year history of Canada vs. Honduras - some 26 meetings (7 wins, 8 draws, 11 losses) is punctuated by a single moment of heartbreak (you know the one). But Canada has had a few  other memorable moments playing against Los Catrachos. Here are three of 'em:
3. Canada 3-1 Honduras (Jan. 10, 1996 - Concacaf Gold Cup)
To appreciate the significance of what appears on paper to simply be a group stage victory of little consequence - since guests Brazil would end up topping the three-team table and both Canada and Honduras were eliminated from 1996 Gold Cup contention after the fact - it's important to look at where Canada had been... and where the team ended up going.
Having gone winless in the 1993 Gold Cup following 1-1 and 2-2 draws vs. Costa Rica and Martinique (followed by an 8-0 loss to Mexico), and having lost 4-2 to Honduras in their last Gold Cup meeting in 1991, Bob Lenarduzzi's 1996 team wasn't exactly high on confidence when they were matched up against La Bicolor. But, with a 3-1 win spearheaded by goals from Carlo Corazzin and Kevin Holness, Canada enjoyed a taste of Gold Cup victory once again...
... and then went ahead and gave up their spot in the 1998 tournament because Jamaica qualified for the World Cup and needed a warm-up. Still, the seed was planted for something more, and Canada would go on to win the 2000 Gold Cup with Corazzin finishing as top scorer. Not bad!
2. Canada 1-0 Honduras (Nov. 13, 2015 - World Cup Qualifying)
Losing 8-1 and getting dumped out of a World Cup hurts. Naturally, one would seek some sort of sentiment-laden response to bring a story of heartbreak and pain to a more paletable conclusion.
A bow tie on top of the steaming pile of hurt, as it were.
Enter Cyle Larin. In 2015, the young Orlando City striker was tearing up Major League Soccer, scoring 17 goals to keep pace with the likes of David Villa, Robbie Keane, Kei Kamara, Bradley Wright-Phillips.
That form earned him a quick call-up to the national team, and his impact was immediate; kicking off the fourth round of 2018 FIFA World Cup qualifiers, Canada hosted Honduras at BC Place to mark an 11-year return to Vancouver, and Larin (albeit fortuitously) scored the only goal of the game, rebounding a Will Johnson header past the 'keeper. The result was earned, Canada's fear of Honduras was slightly eased, and, if only a sentimental salve, the sting of that 8-1 defeat was soothed, if ever so lightly.
Canada wouldn't qualify for the 2018 World Cup, but as Johnson put it post-match: "It's just nice to see us taking steps in the right direction on the field and off the field."
1. Canada 2-1 Honduras (Sept. 14, 1985 - World Cup Qualifying)
Canada's only appearance at a FIFA World Cup came in 1986, so you can imagine that the road to reaching that milestone moment was paved in glory. But, unlike the geometric-inspired hexagons and octagons that define the modern World Cup Qualifying cycle, Canada's path to Mexico '86 was far, far more straightforward - and, as such, had a much finer margin of error, too.
Back then, qualifying for the World Cup came through a tournament called the Concacaf Championship, and in 1985, Canada - who had qualified on a technicality after Jamaica withdrew from the competition (are we sensing a pattern here...?) - went into this regional tournament with the relatively simple task of defeating Haiti and Guatemala twice to advance past the group stage.
Canada would top Group 2 (of three total) and moved on to the final group, consisting of two matches against each of Costa Rica and, you guessed it - Honduras. Canada would pick up a pair of draws against Costa Rica, 1-1 and 0-0 home and away, and managed to defeat the Hondurans 1-0 at Estadio Tiburcio Carias Andino in Tegucigalpa.
But it took a 2-1 win over Honduras at King George V Park in St. John's, Newfoundland to secure their spot in the tournament, with Canada joining hosts Mexico as the two representatives from Concacaf in the 1986 World Cup. The rest, as they say, is history.
So, if anyone ever tells you Canada can't qualify for a World Cup because they have to play Honduras, you tell them they could literally not be more wrong.