'He saw an opportunity': With Morelli out, Salter emerges as Halifax's latest golden boot hopeful 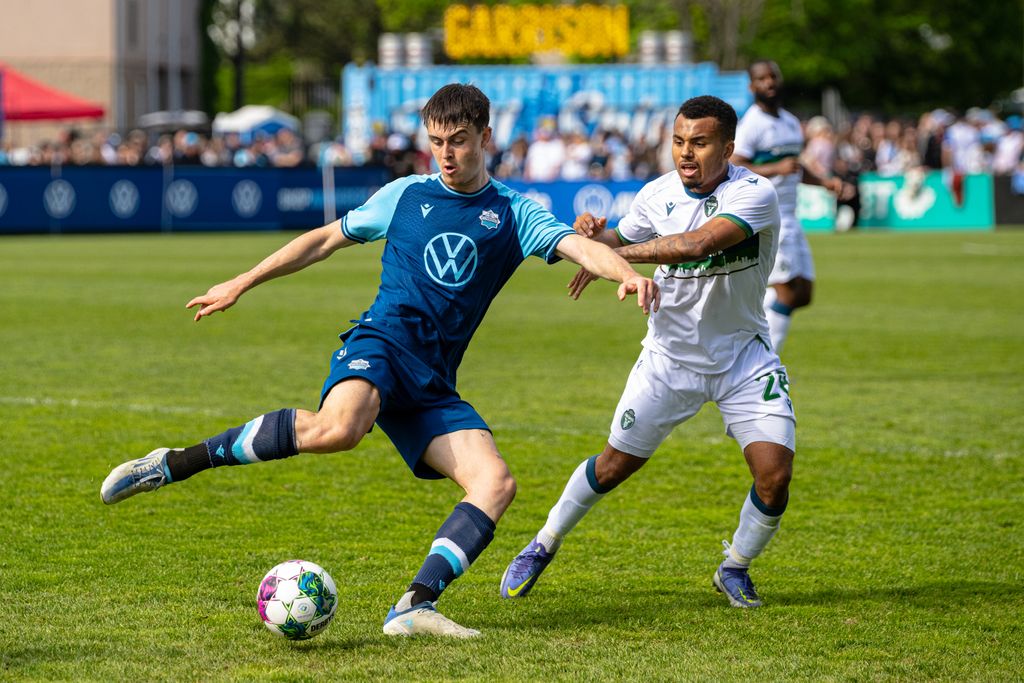 With files from Thomas Nef

TORONTO – Opportunity is a fickle friend in football.

The 21-year-old striker from Laval, QC has emerged as Halifax's latest top prospect at the front of Stephen Hart's attack, the next to a throne left open by Tomasz Skublak, Akeem Garcia, and Morelli before him.

With a joint-second five goals in the CPL's top scorer race, Salter's rise has been one born not of expectation, but of that level of opportunism.

"We didn't put any responsibility upon him; he took the challenge upon himself," Wanderers head coach Stephen Hart told OneSoccer's Thomas Nef, of Salter's rapid ascent into the starting XI.

"He saw an opportunity, in a new position that he could make his own, and embraced everything that comes with that.

"Once things started happening for him, he grew and started to mature in his game a little bit better... and a little bit quicker than expected."

SAM SALTER 🤯@HFXWanderersFC draw level 1-1 vs. #TFClive in this #CanChamp clash from a MAGNIFICENT goal from the Canadian forward 🇨🇦#CanPL | 🔴 https://t.co/7JFAUhgjL6 pic.twitter.com/1Q0qegRkNR

Standing at 6-foot-2, the former Montreal Impact Academy player brings with him a few unique experiences, having gone through the provincial grind with AS Blainville in PLSQ, as well as enjoying a stint in France with Dijon.

Those prior stops helped Salter make the transition into the pros, where he made 22 appearances for Halifax last season, scoring three goals.

"I learned a lot of things from last year in my first season as a professional," Salter told OneSoccer's Thomas Nef. "I'm glad it's paying off. It's led so far to me playing more minutes. Now I've just gotta keep going."

Hart isn't surprised by Salter's growth, saying it was only "a matter of him settling into the league" and learning what it takes to train like a pro.

And, while the Halifax tactician says Salter must continue to work on being "less predictable" and taking "more risks and more shots," there's also no reason to doubt Salter can turn heads by season's end.

He sits one goal behind Pacific FC's Wero Diaz, tied with Tristan Borges of Forge FC and Aribim Pepple of Cavalry FC with five goals to his name.

It's lofty competition, but Salter's got his sights set on Halifax's third golden boot in four seasons.

Can he do it, though?

"There's always a chance," Hart answered. "That ambition would have to be within him. With his personal goals, I don't see why not!"

Sam Salter gets the 'meg on Carducci as @HFXWanderersFC score the go-ahead against @CPLCavalryFC off a, you guessed it - corner kick 🎯#CanPL | 🔴 https://t.co/7JFAUhgjL6 pic.twitter.com/Oy99CzcPcG

Among the many knocking doors of opportunity, the most anticipated is that which is presented by a club at the next level up.

It's early days, of course, but young footballers can't help but dream a soccer dream all the same.

At this point in the league's history, the pathway from CPL to MLS has been more than paved, as players like Joel Waterman, Kadin Chung and Lukas MacNaughton now ply their trade at CF Montreal and Toronto FC respectively.

Others, like Diyaeddine Abzi of York United, have made the step into Europe.

"When those guys perform and do what they achieved, it's motivating," Salter said.

"You always try to go for more. I'm definitely aspiring for a similar move. You work hard every day for that."

Added Hart: "We've talked about that quite a bit with him. If he continues to score goals, I'm sure that opportunity will present itself, too."