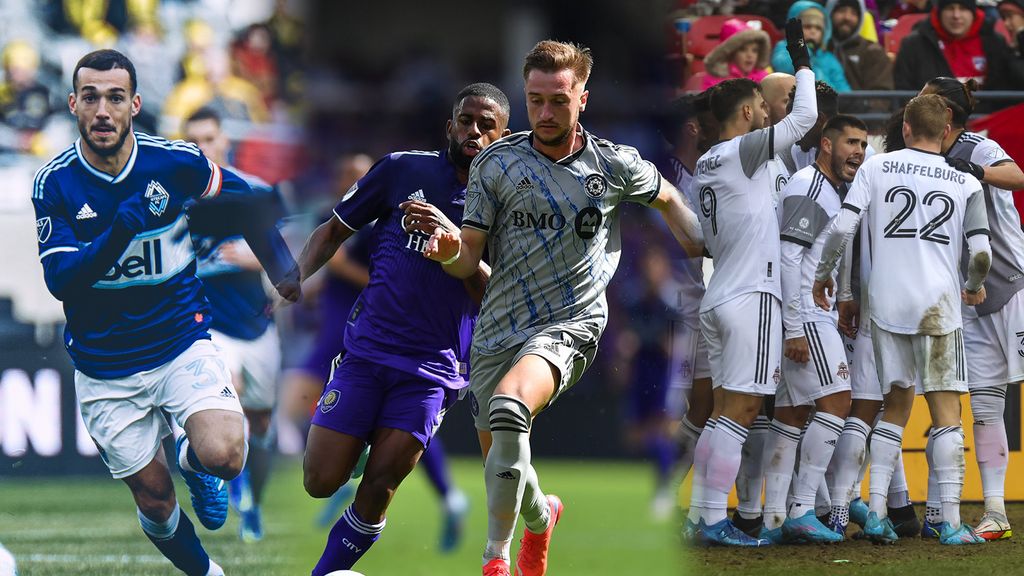 MLS is back. Here are some first impressions as the three Canadian teams kicked off their regular-season campaigns.

First impressions…
We need a GIF for that one:

Orlando is a tough place to start your season and through 45 minutes, Montreal had delivered a composed, controlled road performance. All that was missing was a moment of quality to turn some excellent build-up play into a goal.

But after a first half like that you have to expect adjustments from a coach like Oscar Pareja and a reaction from a playoff-calibre team. And when Orlando took the lead in the opening minutes of the second frame, Montreal needed to settle things down for 10 minutes and take the sting out of the game.

Instead, they continued to take big risks passing out of the back as Orlando pressed them with the extra burst of energy that a goal provides. A second followed and then Romell Quioto was sent off.

Wilfried Nancy would have hoped to unleash Mathieu Choiniere, Joaquin Torres, and Kei Kamara late on in a close game. Instead, Montreal had a mountain to climb. It was a naïve second-half performance but that should not completely erase the promising signs before the break.

I don’t want to overreact, but…
Another striker might be needed. Quioto, Mason Toye, and Kamara is a decent 1-2-3 in theory but Toye appears to be weeks away and now Quioto, whose own injury record is not spotless, is facing a suspension.

The outlook…
There's potential here but next weekend's home opener against Philadelphia already feels big if Montreal is to avoid digging an early hole. To make the complicated task of juggling league and Champions League even more difficult, Nancy's side is on the road for four in a row in MLS after Philly. Thanks a lot, schedule-makers.

First impressions…
Not good. An opening-day loss in Columbus is nothing to panic about, but the manner of the defeat was alarming.

Almost nothing worked early on but the Whitecaps looked particularly clueless in possession, repeatedly passing aimlessly into trouble.

Their attacking set pieces were a massive problem throughout. Jake Nerwinski’s second yellow card came when Vancouver, for reasons unknown, stationed all 10 outfield players within 35 yards of the Crew goal on a free-kick, leaving themselves wide open to a counter-attack.

I don’t want to overreact, but…
Is the 3-5-2 system Sartini rolled out really a fit for the Whitecaps? There are no proven wing-backs on this roster. Instead, Cristian Dajome has been pulled out of a more advanced role — where he was a vital source of secondary scoring — to man one flank and on the other, Javain Brown struggled badly.

It’s hard to imagine Vancouver being truly bad running a simple 4-2-3-1 with two hardworking midfielders behind Ryan Gauld and Dajome and Deiber Caicedo in advanced wide positions. This setup feels much more experimental and if he plans to persist with it, Sartini will have to hope the upside is worth the growing pains.

The outlook…
The schedule ahead for Vancouver:

We’re going to find out what they’re made of.

First impressions…
There was a lot that didn’t really work. Toronto’s attempt to press was not exactly suffocating, they only created two grade-A chances, and Chris Mavinga had a nightmare 45 minutes at centre-back, for starters.

But we knew this wasn’t going to be perfect. What we needed to see was a team that was competitive, and on that front TFC delivered in Bob Bradley’s first game in charge.

On this evidence, the pitiful attitude of last year’s Reds has been banished. Jayden Nelson impressed, Jacob Shaffelburg fought through some difficult moments defensively, and the well-constructed move finished by Jonathan Osorio was a nice example of the football Bradley is coaching this team to play.

As a starting point, this was a performance Bradley can build on.

I don’t want to overreact, but…
Is Carlos Salcedo the best centre-back TFC has ever had?

He has some way to go to top Drew Moor’s list of accomplishments in red, but the Mexico international’s debut provided plenty of evidence of his quality. Salcedo effortlessly put out fires, distributed the ball cleanly, and had the mobility to defend in open space when his inexperienced full-backs were caught out.

The 28-year-old looked well worth the DP salary — and TFC will need him to be while the defensive structure of the team remains a work in progress.

The outlook…
TFC needs to develop a coherent style of play and stay in touch with the playoff line ahead of Lorenzo Insigne’s arrival in July. There were enough positive signs here to feel good about their chances of doing that.