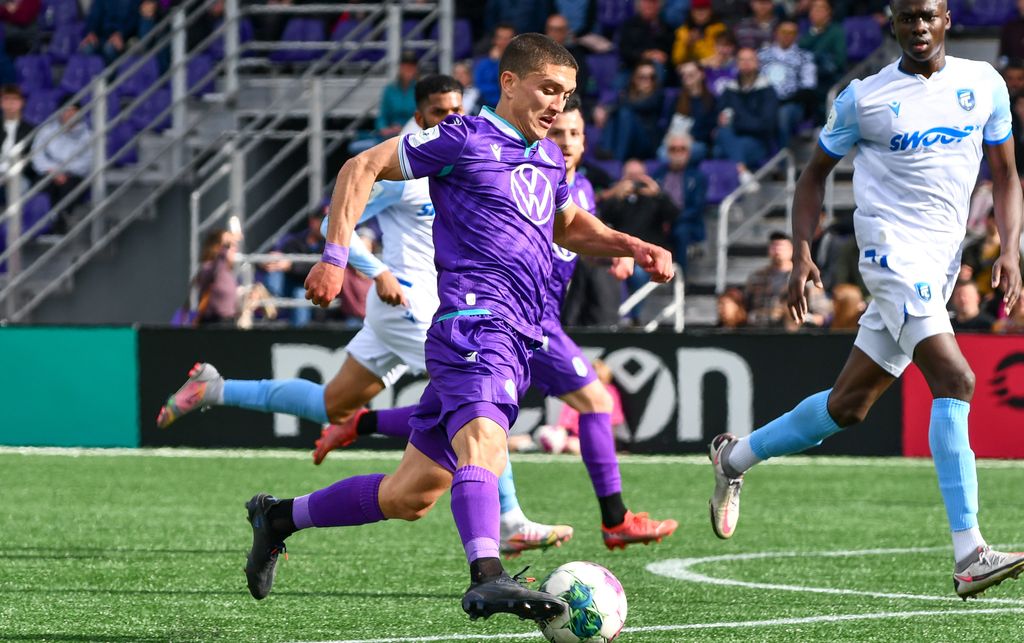 They lost 2021 Coach of the Year Pa-Modou Kah. Kadin Chung and Lukas MacNaughton went to Toronto FC. The most difficult of all perhaps, Player of the Year finalist Terran Campbell and Canadian U-21 Player of the Year — not to mention the man who scored last year’s championship-winning goal — Alessandro Hojabrpour were poached by rivals Forge.

No team in the league lost more quality this past offseason than Pacific FC, and all signs pointed to a championship hangover. Instead, through six matchweeks, they are eight points clear atop the Canadian Premier League table. A big reason for that has been the MVP-calibre play of midfielder Manny Aparicio, who with more freedom to play offensively has thrived.

“I think Manny has arguably been the best central midfielder in the league so far,” said Pacific manager James Merriman earlier in the year. “These are the qualities that he has, he’s a box-to-box central midfielder, he has technique, he has quality on the ball, he does the work defensively, he creates chances going forward and he’s also taking chances now as well. You see the all-around central box-to-box midfielder that he is and he’s a player that I’m excited to work with.”

As his coach mentioned, Aparicio’s game is one of the most well-rounded in the league. He is excellent at winning the ball, has outstanding passing ability, can take free-kicks with the best in the league and has a seemingly undrainable fuel tank. But what has taken his game to the next level this year has been that Merriman and staff have afforded the 26-year-old a lot of license to get forward, and he has been using it liberally.

This has allowed Aparicio to lead the Canadian Premier League in a very surprising statistical category: headed goals. Listed at 5-foot-6, let’s just say he probably isn’t winning many contested headers in the box, making this all the more impressive. On both of his goals this season, Aparicio has made clever late runs into the box to lose his marker and find the open space needed, as evidenced by the clips below (Aparicio is #34).

“I think with James and Armando [Sá], the assistant coach, they’ve given me a lot more freedom,” Aparicio told the CanPL.ca newsroom podcast this week.

Aparicio has had eight chances so far this season and is third in the league in expected assists with 1.37. He already has two goals and an assist so far this season, approaching his totals for last season when he had three of each.

These runs, however, don’t just create goals for Aparicio himself but add another element to the Pacific attack. On the opening goal this weekend against Edmonton, watch as Aparicio (top left of the screen) starts the attack with an excellent ball over the top, and then continues his run all the way into the box, bypassing multiple defenders. While he isn’t directly involved in the final act of Alejandro Diaz’s goal, he is certainly another option for the Pacific attack, as well as another concern for the Edmonton centre-backs.

Here is another example from a match against Valour earlier in the season, where Aparicio again starts the attack with a pass and breaks downfield on the counter. He follows that by making a lung-busting run into the box, pulling a defender out of position and creating the space where Josh Heard can run into and score.

This aggressive style of play also lends itself well to recovering the ball when he, or Pacific, does lose it. Despite mostly being deployed as an attacking midfielder, Aparicio is third in the league in recoveries with 51. He is also, again somewhat inexplicably, ninth in the league in aerial duels won, again demonstrating his elite level of anticipation.

Here is a good example of that in action. While Aparicio’s through ball to Marco Bustos is ultimately unsuccessful, he follows up on the play and puts himself in the perfect position to win the ball back. Perhaps the next evolution of his game is to shoot when he gets in that position, but it is still a good example of how allowing him to be aggressive in the final third has created chances for the league leaders.

Analyst Oliver Platt did make a good point on the OneSoccer broadcast this week, mentioning that if Aparicio is going to play this style all season Pacific is going to need to manage his minutes. So far, Aparicio has played a league-leading 614 minutes and with Canadian Championship action and Concacaf League coming up, despite being one of the fittest players in the league, he still may need to be rotated.

If he can sustain this level of play for the entire season, however, Aparicio will surely be front and centre in the league’s Player of the Year conversation. Pacific, as a result, will also almost certainly be in the running to repeat as champions.