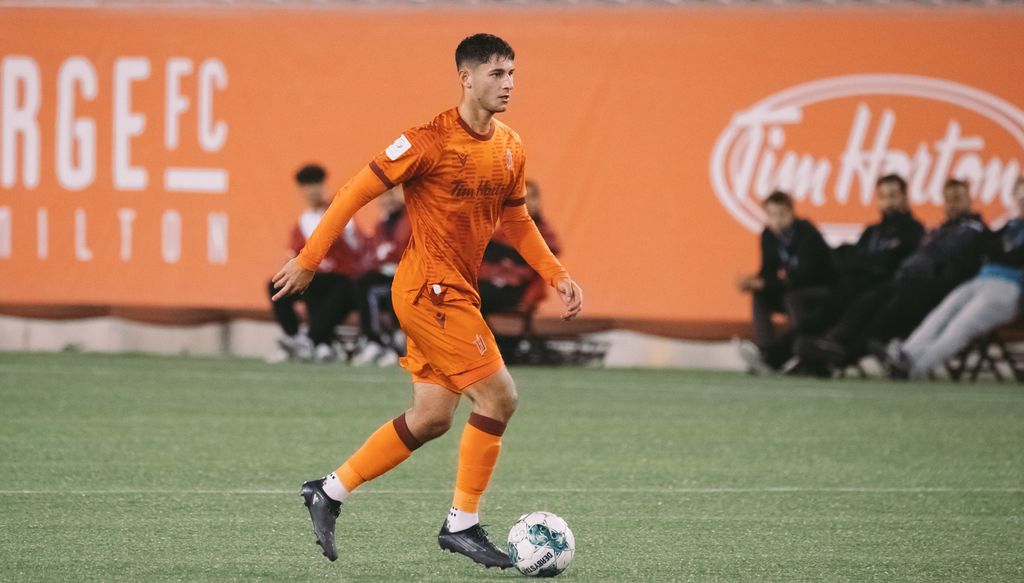 On a blustery Dec. 5, 2021 evening at Tim Hortons Field in Hamilton, Hojabrpour beat Triston Henry at his near post from a header to score the lone goal as Pacific FC defeated Forge FC 1-0 to lift their first-ever North Star Shield.

Just over a month later, Hojabrpour made headlines around the league for a different reason. It was announced that he and fellow Pacific teammate Terran Campbell would be crossing the country to join Forge for the 2022 season.

On Sunday, Hojabrpour and Forge will be back in the final as they face Atlético Ottawa at TD Place Stadium. Before the biggest game of the season, the 22-year-old Forge midfielder reflected on his decision, and why it has undoubtedly been the right choice for his career.

“At the end of the day one of the reasons I play the game is that it’s a sport I love doing, but also something that I want to get better at,” he told CanPL.ca this week.

“I want to continually improve and I thought it was an opportunity, so it ended kind of perfectly that I was able to win a championship, my name was a little bit bigger out there because of the goal and stuff like that. Forge was offering me a chance to come play. It was really one of those things where if I’m thinking back now, it would have been really a bad decision not to do what I did.”

He said Forge had been interested in his services since 2019. This year, the organization will certainly be thrilled they were finally able to get the young midfielder on board. While it was 2021 Player of the Year candidate Campbell who looked like the bigger acquisition at the time, it is Hojabrpour who has proven to be a critical piece in this Forge side.

He finished the season with the third-most minutes played on the club, carving out a role at the base of midfield where he has often done the thankless work that has allowed Forge’s other midfielders to thrive. He led the club in recoveries this past season, while also being a key connector in the middle of the park for a club that thrives on possessing the ball, completing 87.8 per cent of his passes.

While that consistency has been the hallmark of his game this year, there have also been some moments of magic. He scored a worldie in the club’s home opener back in May against Cavalry FC, for example. Hojabrpour also helped to eliminate Cavalry from the 2022 playoffs, setting up the opening goal in leg two of the semifinals this past weekend with a brilliant through-ball to David Choinière.

“These are the moments, just like the goal in the final last year, that grow you as a player and you kind of realize, ‘Wow, I can do things like that’,” said Hojabrpour. “It just helps the confidence, it motivates me even more.”

🔨 @ForgeFCHamilton take the lead! David Choiniere once again provides a goal in a big moment for The Hammers#CanPL | 📺 @onesoccerpic.twitter.com/8WKK9h7Pge

As mentioned, Hojabrpour considers improvement a big part of his game, and he says playing for Forge has helped him to learn considerably, particularly when it comes to the tactical side of the sport. He says in particular working with Forge head coach Bobby Smyrniotis has helped him see the game in a different light.

For his part, the Forge coach has been impressed by how quickly Hojabrpour has been able to absorb new tactical information. It is part of why he has become such a trusted member of one of the league’s deepest sides.

“I think that’s the biggest thing, being able to take in that information and take in a tactical role and really going out there and executing it,” said Smyrniotis, “and he has only gotten better as the year has gone on.”

As the 2022 Final looms, Hojabrpour’s role on the team will only become more important. That was confirmed in the 42nd minute of the second leg, when Forge captain Kyle Bekker was shown a red card, meaning he will miss the Final through suspension.

Hojabrpour has considered it a privilege to play alongside the veteran midfielder this season and has learned plenty, including the final details that make Bekker such a special player.

“Kyle is irreplaceable in our team. I think his quality is incredible. He is able to just change a game within seconds,” said Hojabrpour. “He is able to play forward better than anyone I have ever played with and we are going to miss him a lot.”

Without Bekker in the midfield, Hojabrpour knows that he will be relied upon to raise his level on Sunday.

“I think the biggest thing for myself and the rest of the guys in the midfield, and the backline and up front, is what more can you bring out of yourself for that game to kind of make up for his absence,” he said. “I think if everyone just goes into the game giving their all I think we can still perform to a great standard even when he’s not there.”

That Forge standard has been cultivated through years of playing big games. This year alone, they started the year playing against Mexican giants Cruz Azul, and has included a Canadian Championship final against Toronto FC, and a match against CF Montréal. Through it all, however, the club’s approach and beliefs have never changed.

“One of the things we do here really well is that no matter the opponent, whether it is Cruz Azul, or Ottawa in this Final, everyone gets the same preparation from us,” said Hojabrpour. “We focus on ourselves, we focus on what details and things we can bring to the match. Experience in those bigger games like that will obviously help the group in bigger games like this.”

Like last year for Hojabrpour, that big game will come on the road as the team travels to what is expected to be a raucous crowd in the nation’s capital that will heavily favour Atlético Ottawa.

“It’s you versus everyone there, which is cool, which is probably a different thing from what the guys here are used to from last year,” said Hojabrpour. “But we have to approach it the exact same way as if we were playing at home. Our football is that we want to be on the front foot, we want to be dictating the play. If we take it like that I don’t see the home-field advantage really affecting us that much.”