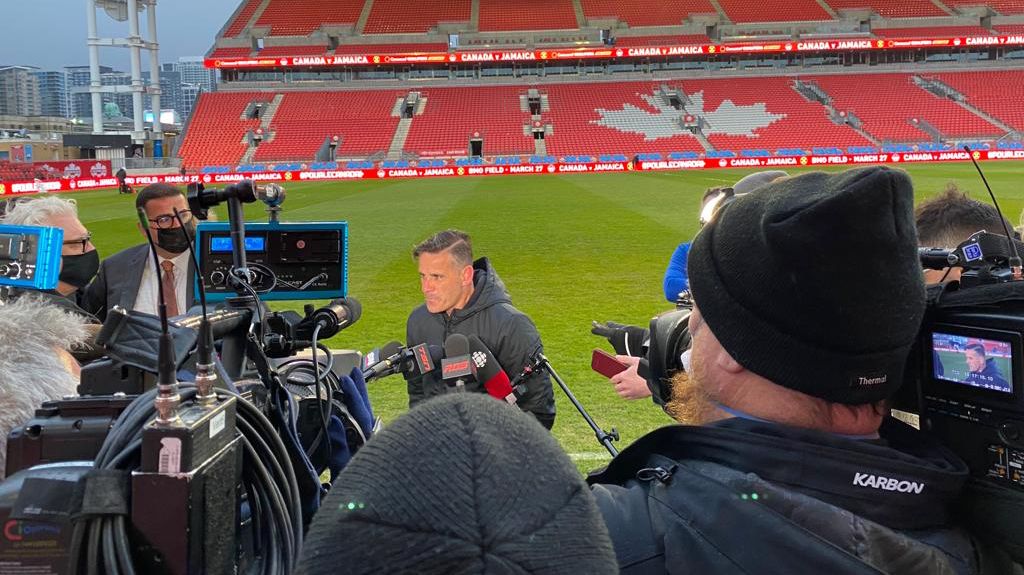 Canada Men's National Team manager John Herdman says his team can take nothing for granted when they take on Jamaica in World Cup Qualifying on Sunday afternoon, stressing that even if the path to the 2022 FIFA World Cup seems straight ahead, there is still work to be done before any celebrations can settle into their camp.

Speaking to gathered reporters at BMO Field following training on Saturday evening, Herdman reflected on the grounding experience he and his team went through on Thursday night against Costa Rica, and wove silver linings from it as they wrapped up preparations for tomorrow's final home rally (4PM ET / 1PM PT, available on OneSoccer).

"Yesterday and today was just recognizing what happened in Costa Rica," Herdman affirmed. "For me, it was a performance we could be proud of, but then we put that in the past. There are things we can take from that - the bravery, the courage to play in our style of football. But we recognize that this is a completely different animal, with Jamaica, and the conditions of the pitch and the conditions that will be here.

"This is going to be a wild night for football."

PREVIEW: 3 things you NEED to know for Canada vs. Jamaica in WCQ

Herdman will have 23 of his 25 players to select from, with midfielder Mark-Anthony Kaye suspended following his red card against Costa Rica, and defender Steven Vitoria still fighting for full fitness. That means Sam Adekugbe and Doneil Henry - both of whom missed Thursday night's match-up with yellow card accumulation - return back into the fold for this historic day in Canadian soccer.

The weight of the moment isn't lost on anyone. But, Herdman explained, it's his job to ensure his players are neither flatted nor buoyed by the air of the occassion.

"You've got to keep it in perspective that we can do something amazing. That was at the beginning. We made out a map of what this could mean to really define what the new Canada is.

"But coming out of Costa Rica? That was like the gut-punch we needed; get back down to Earth, get your feet on the ground, let's get this done. Let's get back to business.

"At the end of the day, a group of men have got to put Canada into a World Cup, and they're going to have to work frickin' hard tomorrow against Jamaica in really tough conditions (to do so)."

Stephen Eustaquio’s message to #CanMNT fans: “Get ready to be in Qatar.”

Still, if everything goes as planned, Canada will be celebrating their first qualification to the FIFA World Cup since 1986 in front of 30,000+ supporters at BMO Field. A win or a draw against an already-eliminated Jamaica would do the trick, and with a loud crowd behind them, Herdman expects his players to rise to the occassion.

"It's just a completely different context," Herdman said, of the match. "When you come into a stadium with your own fans, it's just a different feel and vibe and buzz.

"The reality for this group tomorrow is they have to stay together and impose themselves on Jamaica from the first whistle.

"It's not going to be pretty tomorrow, but they've got to find a way to get that ball into the back of the net. Those midfielders that were half a yard short (vs. Costa Rica)? They've got to be there tomorrow."