Meet Electric City FC: The Peterborough club aiming for the CPL in 2024

At first, Rob Jenkins had reservations about the idea of swapping his life in Calgary for a new one in Peterborough, Ontario.

Jenkins was the manager of football operations at Cavalry in the Canadian Premier League and had struck up a successful partnership with head coach Tommy Wheeldon Jr. In the CPL’s inaugural season, the Cavs finished atop the regular-season standings and established a model gameday experience at Spruce Meadows.

“I always tell people that our relationship was perfect,” Jenkins recalled. “I’ll take care of everything off the pitch, and he worries about everything on the pitch. We understood where everybody’s strengths were.”

The appeal of leaving behind what they had worked to build for a prospective semi-professional, League1 Ontario team on the other side of the country was not immediately apparent.

“The reality of it was I’d never been to Peterborough before,” Jenkins said. “I’d barely been out east other than just travelling for soccer.”

Partially due to the way the pandemic had slowed Cavalry and the CPL’s progress, Jenkins decided to visit and check out the pitch being made by Keaton Robbins, a Peterborough local and former reporter who had covered the Ottawa Fury and connected with him via an ex-Fury player.

“They lined up 30 or 40 meetings for me,” Jenkins continued. “I met the mayor, I met the MP, I met multiple businesspeople, community leaders. I got a great, amazing sense for this community.

“The biggest takeaway I got from that week, and I tell people this is what turned my head around, was everywhere else that I’ve been before, you always have a lot of doubters. 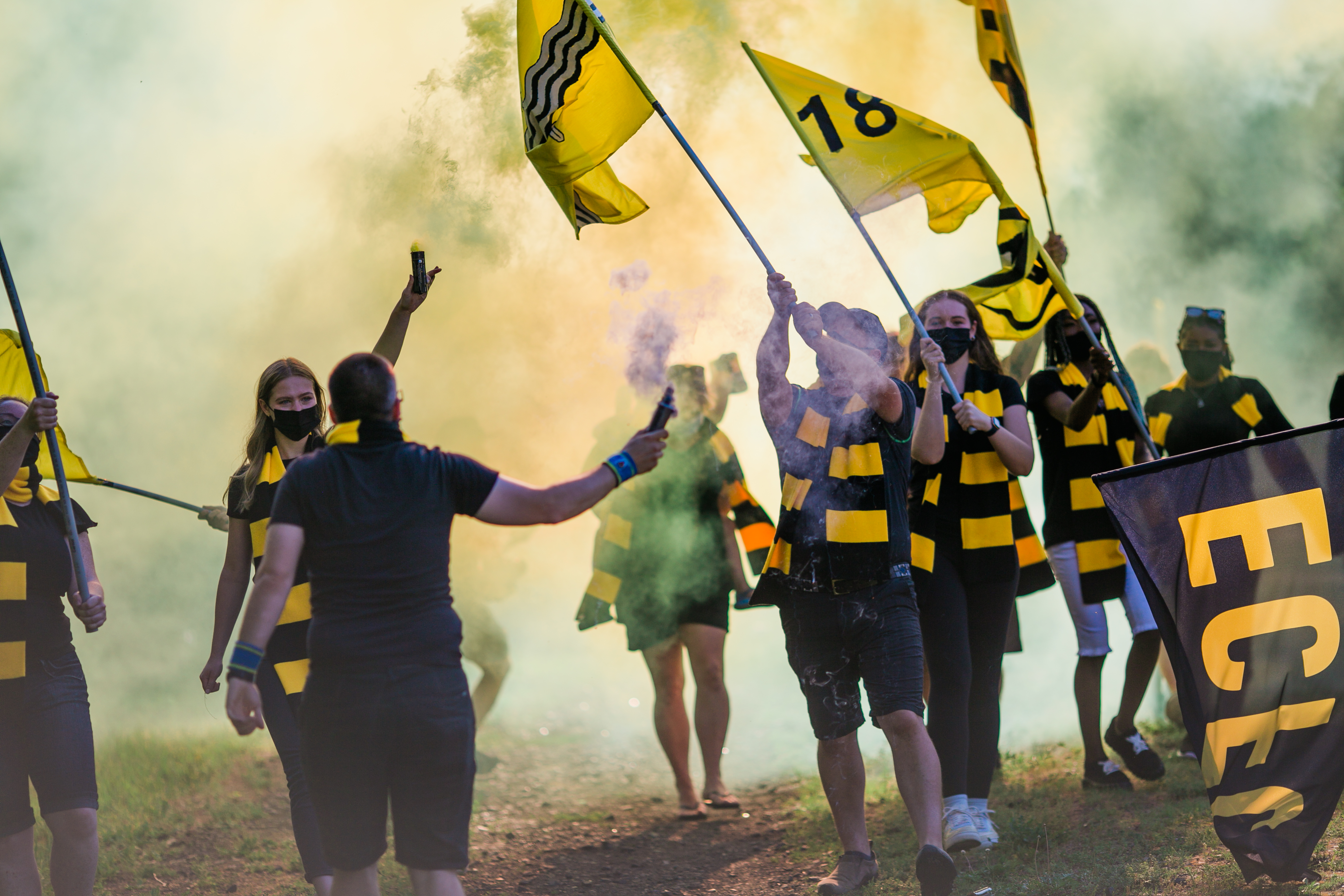 “You always have a lot of people who tell you why not. ‘It isn’t going to work.’ ‘Somebody tried it before.’ That one week I was here, I didn’t get one of those from 40 people.

“Everybody’s response right away was, ‘that sounds amazing. How can we help? What can I do?’ I took that away and said, OK, this is something a little bit interesting.”

Jenkins was so enthused by what he had encountered that he agreed to come on board — unpaid, as an ownership group did not even exist yet — on one condition: that they aimed higher than the semi-pro circuit and pursued a fully professional club.

“I was in Toronto waiting for my flight back home and I decided to stop in and have a chat with (former CPL commissioner) David Clanachan,” Jenkins explained.

“I kind of pitched the idea to him. I said, ‘if we can do some of the right things here in Peterborough, what do you think? Do you think you guys would support that?’

“David was great. He said, ‘you know what, honestly, we’ve never really looked at it. That’s a small market. But we trust your ability. We know you were an integral part at Cavalry. If you guys can go in there and prove a market, absolutely.’”

A vision for the future

Eighteen months later, Electric City Football Club is preparing both men’s and women’s teams to kick a ball for the first time in League1 Ontario this season. It has made its first signings, has plans for a soccer-specific stadium and training facility, and is intent on pushing its men’s side to the CPL in 2024.

It is offering an idyllic vision for the future of professional soccer in communities like Peterborough across the country. And plenty will be watching.

Since Jenkins — who is now club president — arrived in Peterborough, ECFC has built an ownership group that includes multiple local investors, including majority owner Gregory Couch. Between their backing and a supportive, close-knit community, the belief is that a sustainable club can be built in an area much smaller than the existing CPL markets. 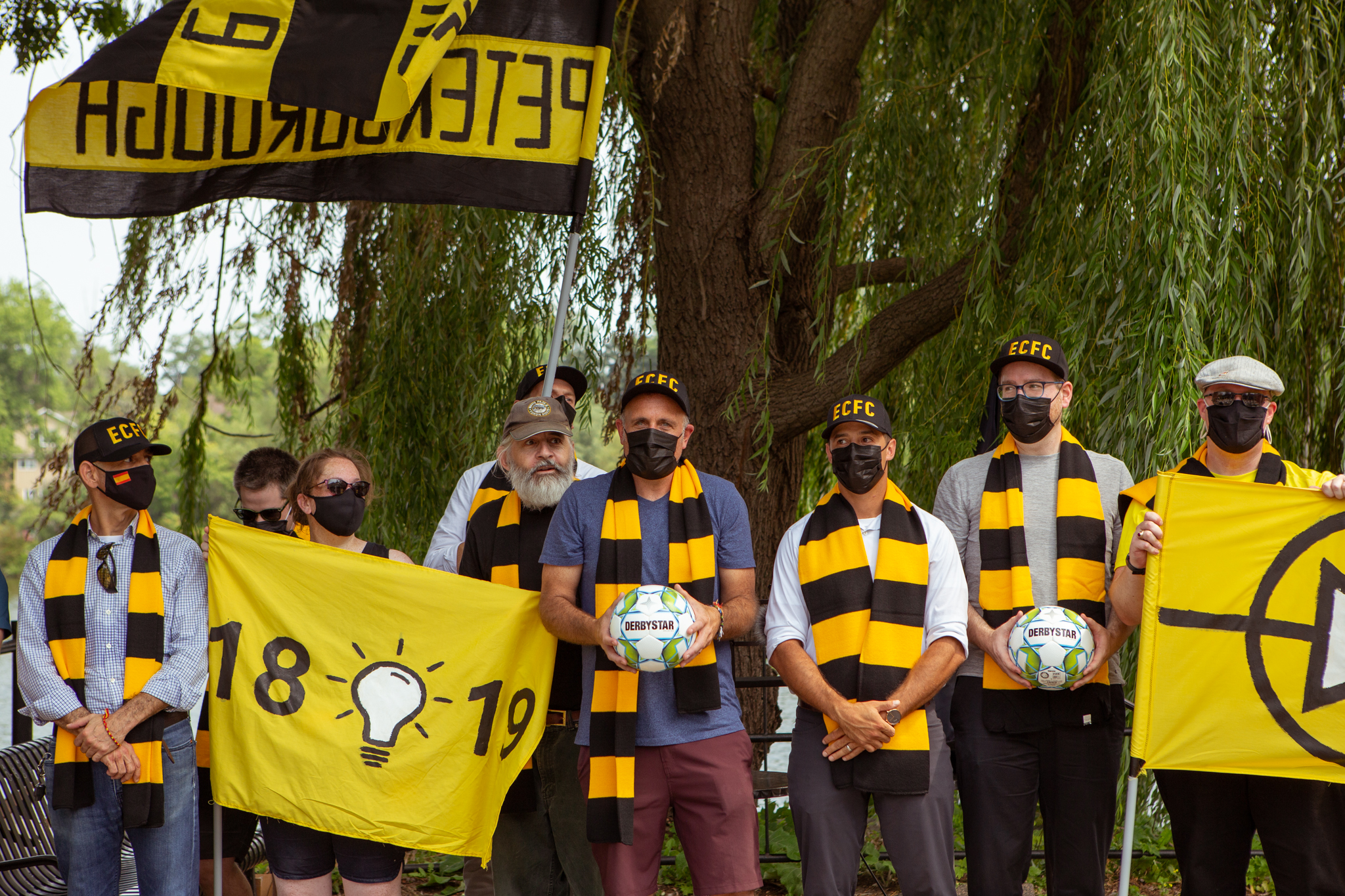 Jenkins sees advantages in Peterborough’s circumstances. For starters, ECFC will be the only game in town in the summer, with junior hockey’s Peterborough Petes in their offseason.

Marketing dollars go a lot further. “In a city that only has four or five main streets, when we put 20 signs out there, it makes an impact,” Jenkins said. “Whereas if we were to pick up 20 signs and put them in Toronto or Calgary, it’s very hard. We want to be able to walk around the city and everybody knows who we are.”

And there is a loyalty to Peterborough among its residents and businesses that is not so common in bigger cities. Six weeks after beginning to market sponsorships, the club has reached a third of its target in sales. The club store could not keep up with demand for merchandise over the holidays.

“Everybody that comes into our shop here to buy merchandise, we ask them if they’re soccer fans,” Jenkins added. “Some of them are, but some of them are like, ‘nope. This is a project we think is going to be good for the community and we’re here to support it.’”

Making the CPL a reality

With all the hurdles a club must overcome to join the CPL, 2024 appears an incredibly ambitious timeline. But ECFC’s plans are quickly becoming a reality.

The club has a partner on the development of a facility it will call home. In April, they will lay sod there for a training pitch that will be used this year. Next year, seating for up to 2,000 supporters will be added to create a home venue.

For the planned CPL debut, that capacity will increase to at least 5,000. The vision is for a grass pitch lined by two enclosed, tight grandstands, a supporters’ section behind one goal, and a VIP area behind the other. ECFC has consulted with the crews that built BMO Field in Toronto and Stade Saputo in Montreal.

In the meantime, Jenkins is attempting to replicate what he and Wheeldon Jr. built with the Calgary Foothills by creating a professional environment in advance of their professional debut. In Zachary Ellis-Hayden, Jenkins believes he has his Nik Ledgerwood — a pro-calibre player sold on the idea of being a part of the project from the beginning.

They're coming back home to change the game in Canada.

And despite the current absence of a professional league, the standards set for the women’s team will be the same. Everything is done as one unified club: season tickets and sponsorships, for example, are inclusive of both the men’s and women’s sides.

This is a Canadian soccer experiment that will have implications well beyond Peterborough.

“I always encourage people to come down and meet with us and see our facilities, see what we’re building,” Jenkins said. “People can say a lot of things. They can say, ‘I want to be CPL in this year or that year’ and sometimes it’s just noise.

“We’re making sure that when people come here, they’re like, ‘oh, this is what you mean. This is a professional organization, and this is how it operates.

“It’s just not what everybody else sees. It’s the structure behind it.”