PLATT: Jessie Fleming is now the leader Canada turns to

Bev Priestman set the tone with her very first sentence.

“Tomorrow represents the start of a new journey,” the Canada coach told the media a day before her team drew 1-1 against England to kick off the Arnold Clark Cup.

In other words, it’s time to turn the page from Olympic gold to the 2023 World Cup, and to focus on the progress that will be required of this Canadian side if it wishes to be a contender next year.

In that respect, Priestman’s choice of captain in the absence of Christine Sinclair felt symbolic.

There are plenty of good candidates, and Sinclair will take back the armband when she returns. But for now, Jessie Fleming is leading the team.

It is inarguable at this point that Fleming is the closest thing Canada has to a young Sinclair.

They are different players, clearly: Sinclair a deadly, physical goalscorer and Fleming a diminutive yet tireless midfield creator.

But over the past year, Fleming has become the talisman Sinclair has been for Canada for so long: the team turns to her in its most difficult moments and is at its best when she is on song. 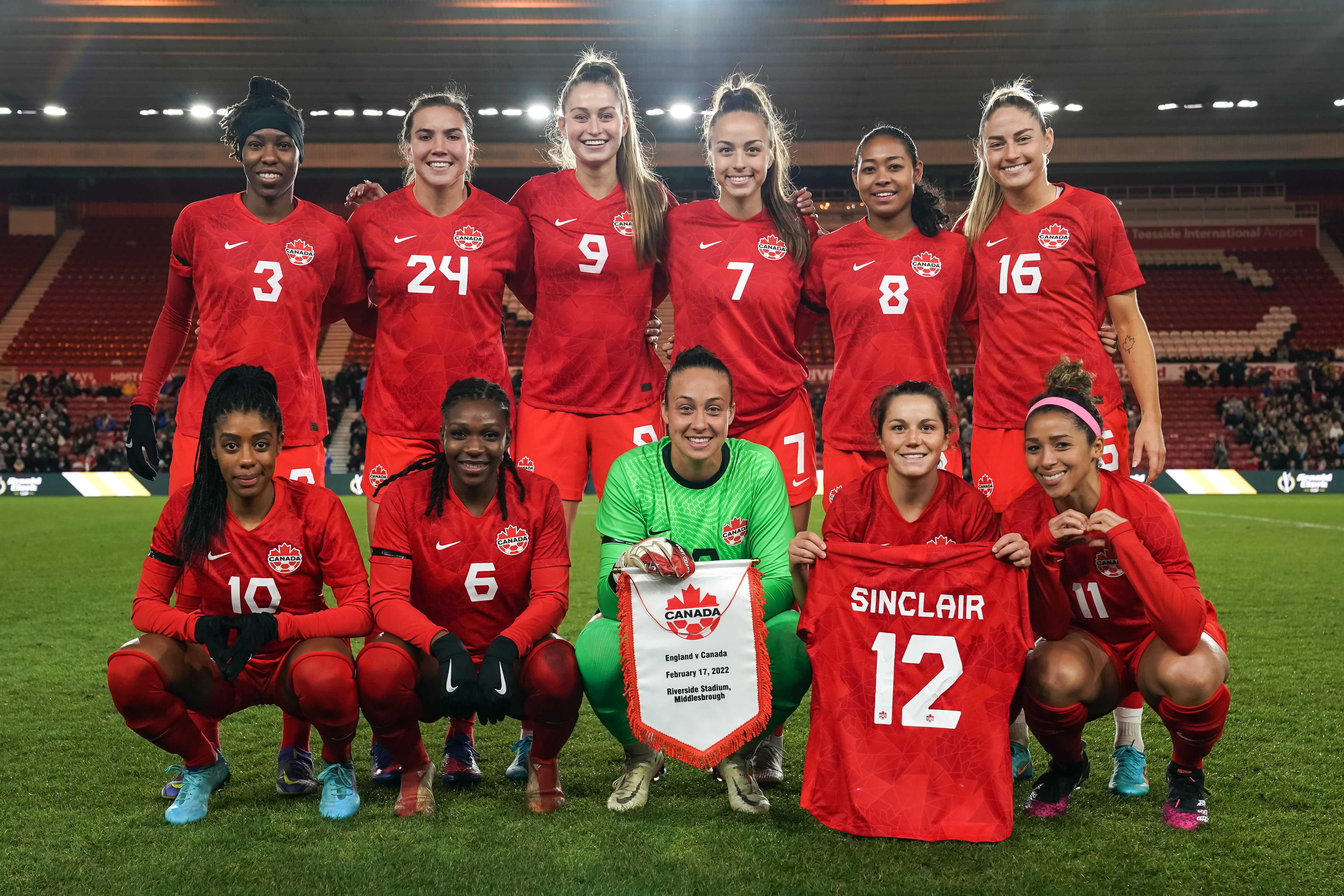 One of the many lasting imprints Sinclair will leave on this team is the way she has shaped its character. The traits that come to mind when you think of Sinclair — resilient, dedicated, and modest to a point that can see her underestimated — were the same ones that defined Canada’s run to a gold medal. And Fleming, in particular, is cut from that cloth.

“Jessie’s very similar to Christine in her leadership,” Priestman said. “She leads by example. She’ll be the hardest-working player on the pitch.”

Fleming’s importance was evident against England on Thursday. After a difficult first half, Canada’s improvement after the break was driven by the 23-year-old, who found more space between the lines, made smart runs beyond the forwards, and caused the Lionesses problems in transition with more than one perfectly weighted through ball.

At Chelsea, one of the best teams in the world, Fleming has featured in all 13 league matches this season, starting eight. She spoke of aspiring to reach the level of her teammates Pernille Harder and Ji So-yun this week and no longer does that look like a lofty goal.

If Canada is to have a chance of winning next year’s World Cup, it must dramatically improve its record against European nations.

Since the turn of the millennium, the Canadians have gone 1-1-8 against European teams at World Cups. The only win was against Switzerland, a team that has never ranked among the top 10 in the world. Even in Tokyo, Canada did not beat a European side outside of a penalty shootout.

At the Olympics, Canada demonstrated its potential to be a world-class defensive team, particularly when it came to absorbing pressure but limiting high-quality chances. Canada faced 93 shots at the tournament — 20 more than any other side — but just 25 hit the target, which was the fewest of the four teams that reached the medal games.

That was the foundation of an unlikely gold medal. Remarkably, Canada went all the way despite failing to score from open play in the knockout stage.

Improving Canada’s play in possession will be the focus of Priestman’s attention at the Arnold Clark Cup and beyond. A useful way to quantify the dynamics of Canada’s games at the Olympics is a statistic called field tilt. This is similar to a simple possession stat, but only includes completed passes in the final third to illustrate how much of the ball each team has had in the area of the field where they can actually hurt the opposition. 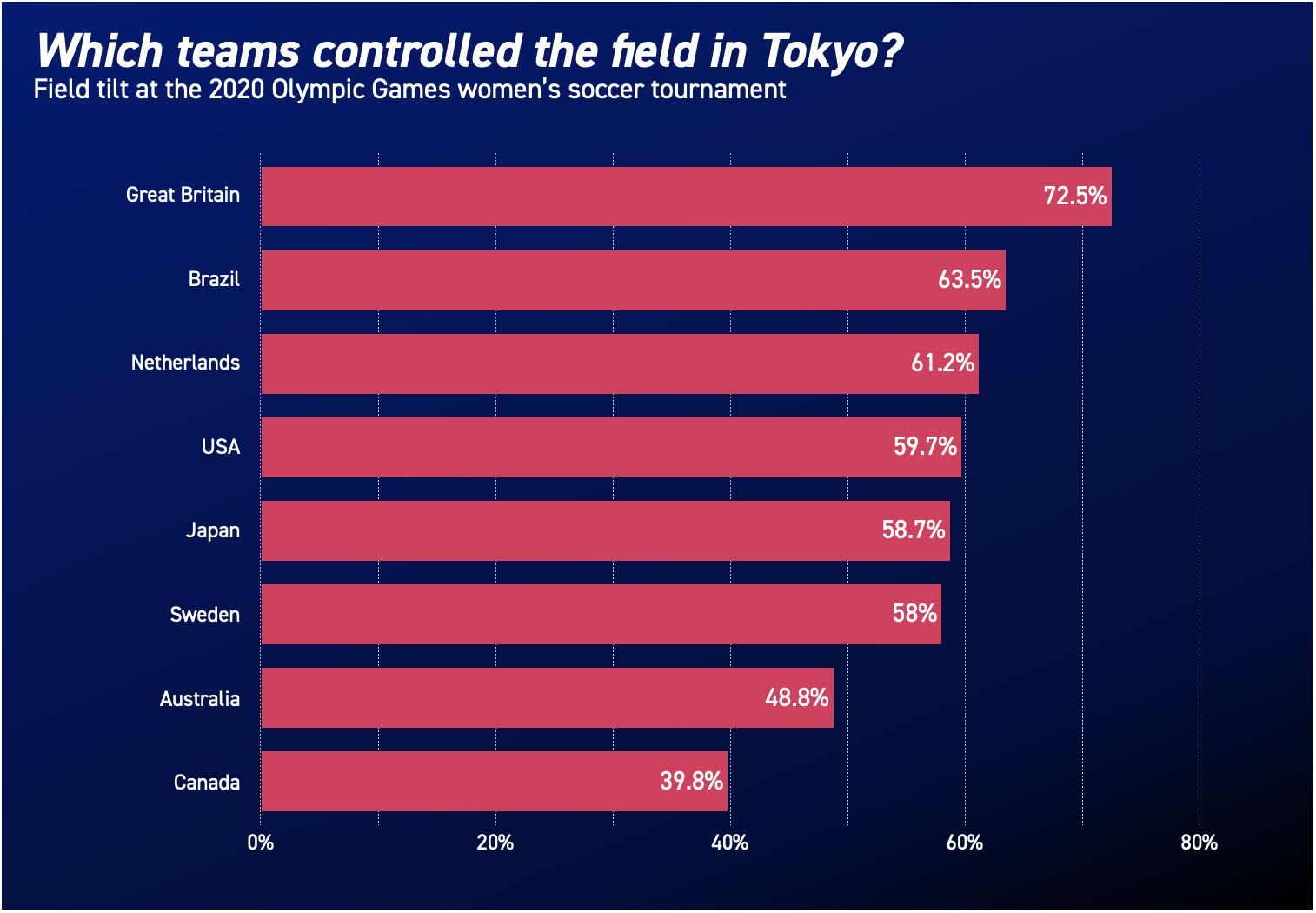 It should be noted that Great Britain, Brazil, Netherlands, and Japan did not reach the semi-finals, and so did not play two extra matches against strong opponents that would likely push their numbers down. But of the eight teams that reached the knockout stage, Canada ranks last by some distance.

The first half against England did not feel like a step forward, with Canada failing to register a shot on target.

But there was improvement after the break. Canada became more dangerous in transition thanks to Fleming’s range of passing and Ashley Lawrence’s ability to carry the ball through midfield, which led to Janine Beckie’s equalizer.

A key question for Priestman is how much she will be willing to alter a gold-medal winning defensive structure in order to improve the team’s play with the ball. Lawrence is a world-class full-back but may help Canada in central midfield. Desiree Scott protects the defence but is not as expansive as Quinn in possession.

“What got us to gold,” Fleming noted before the game, “isn’t going to necessarily guarantee us continued success.”