'Never thought I'd be on this side': Ashtone Morgan raring for Toronto FC reunion

HAMILTON – Ashtone Morgan hugged the touchline, his feet shuffling as he ran sideways down the field, waiting to see how the play developed.

As the teammate to his right received the ball, Morgan started to pick up speed. One simple pass, and he was in, behind the opposition line in plenty of space down the left flank.

He took a touch, raised his head slightly, and then leaned back and fired a cross into the box. The ball sailed invitingly through the air, before connecting with the head of his striker just in front of goal and into the back of the net.

The momentum of the header knocked the striker off balance, but as he got to his feet, he quickly pointed at Morgan, acknowledging the incredible pass. The rest of his teammates followed suit, as they met Morgan in an embrace.

It is a scene with which Canadian soccer fans are plenty familiar. One that once earned Morgan the moniker “nasty left-back,” and it’s evidence of the level of quality that has him tied for third all-time with Justin Morrow for most appearances in the Canadian Championship.

Only, there was something different this time. Morgan wasn’t wearing red. Instead of the colour he had donned 168 times for Toronto FC and 18 times for the Canadian men’s national team, he was wearing the orange kit of Forge FC. The assist came in his 20th Canadian Championship appearance against Mont-Royal Outremont in the preliminary round of the 2022 competition.

But if seeing Morgan wearing orange still takes some getting used to, the next part is even more bizarre. Morgan and Forge will take on his former club, Toronto FC, in the long-delayed 2020 Canadian Championship final on Saturday, June 4 at Tim Horton’s Field.

It will be a historic moment for Forge, as the first Canadian Premier League club to compete in the tournament’s final. But it is also a chance to examine Morgan’s legacy — what the 31-year-old has done, and continues to do, for the sport in this country.

“I think Ashtone was an ambassador of the club [for Toronto FC] being there for so many years and so many performances in all competitions,” Forge coach Bobby Smyrniotis told CanPL.ca this week, “and especially in the Canadian Championship where he featured and won a few trophies.”

More than a few, perhaps. Five times in his ten seasons with Toronto FC, Morgan lifted the Voyageurs Cup. For his part, Morgan acknowledges that it will be a little bit weird stepping onto the pitch against his former side on Saturday.

“I never thought I would be on this side of it playing against [Toronto FC],” said Morgan, “Especially for a trophy. Especially the Canadian cup.”

But now in his 13th season as a professional footballer, there can be no doubts as to whose hands Morgan wants to hold the Voyageurs Cup in on Saturday.

“It is going to be emotional a little bit as [Toronto] has been my club for a long time, but I’m with Forge and I’m ready to go and raise a trophy for this club.”

Since then, his minutes have unfortunately been a bit sparse as he suffered an injury in the club’s Canadian Premier League season opener against Pacific FC at Starlight Stadium. But even if Morgan hasn’t always been on the pitch, his impact from the moment he arrived has been evident.

“He’s been fantastic for us since the day he got here,” said Forge captain Kyle Bekker. “He brings a different level of competition to training, that I think we’ve kind of been missing. Obviously, we have a very young group right now, but that professionalism, that day-to-day competitive spirit that he brings is fantastic and it has raised some guy’s levels since day one, which has been fantastic to see.”

Morgan had been watching Forge play since their inaugural season, and after spending two seasons in the United States with the Real Salt Lake organization, he felt it was a good moment to return to his roots.

“I think it was time to come back to Canada, back to this area, close to the home and family,” said Morgan. “I enjoyed watching Forge. I enjoy even more playing for Forge. I’m having a great time, smiles every day here.”

He has joined a young Forge team, that after going to three straight Canadian Premier League finals, two of which they won, are transitioning slightly to the next stage in their evolution.

This has afforded Morgan the chance to mentor many of his young teammates and give plenty of advice from his wealth of experience. Like what he hopes to impart to his team before Saturday’s final: “Just stay in the moment and express yourself. Don’t play with fear. I think we know what we are about and we need to just focus on our game, and how we play football no matter who we play against.”

He is hoping that if they can do that, Forge will add a Voyageurs Cup to the two North Star Shields they have in the trophy cabinet at Tim Horton’s Field. Even as one of the winningest players in the competition’s history, being a member of the first CPL side to do so would mean a lot to him.

“Obviously you want to have that chip on your shoulder to be the best team in Canada,” said Morgan during an interview with CanPL.ca at Tim Hortons Field on Friday. “I know it’s an old, like a replayed final, but at the end of the day, there is a trophy on the line. We play for trophies, whether it’s 2020 or 2022 we want to win this game. Put a good show on for our fans and start a new rivalry maybe.”

While that rivalry will ultimately extend to the stands with plenty of Toronto FC supporters expected to travel, Morgan is hoping to see yet another raucous home crowd at Tim Horton’s Field on Saturday.

“Hopefully we’re gonna fill this out,” he said. “All orange, and not red.” 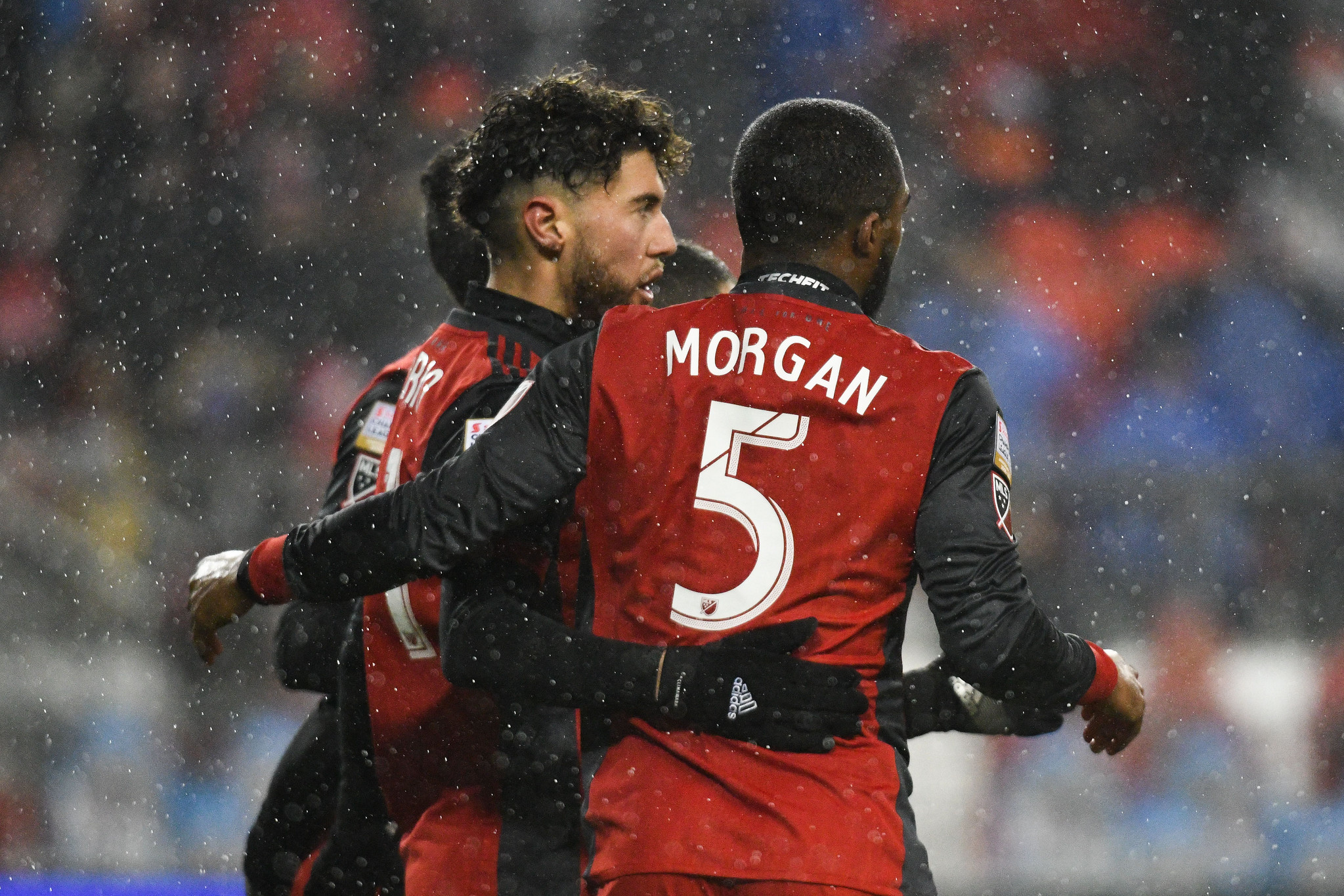 Morgan collected the ball and instantly skipped past his man. Sprinting into space down the left flank, he played a quick one-two with a teammate and at the top of the box.

Getting the ball back, Morgan turned his defender with a brilliant bit of dribbling and continued into the box.

“Look at Morgan!” exclaimed Gerry Dobson on the broadcast. “No wonder he’s been called into the Canadian national team.”

The ball deflected to Ryan Johnson, whose cross was headed by Nick Soolsma into the path of Reggie Lambe. The striker found some space and sent a shot across goal and into the back of the Vancouver Whitecaps net. The goal clinched Toronto FC the 2012 Canadian Championship trophy, the first in which Morgan appeared.

Back then, the tournament consisted of just four teams: Toronto; the Whitecaps, who were in their first season as an MLS franchise; Montreal Impact; and FC Edmonton, then both playing in the NASL.

The 2022 tournament featured 13 clubs from four different leagues. As Morgan prepares for his ninth Canadian Championship final, he can’t help but reflect on how far the competition, not to mention the sport in this country, has come.

“The opportunities that are now around us and have arisen, it’s amazing,” said Morgan. “Before we had three Canadian teams that you could try out for, but now we have multiple teams and ample opportunities to grow as a player and from a boy to a man.”

“It’s an exciting time to be a Canadian, and a young Canadian. Hopefully, all the young Canadians are seeing this and feeling it and staying hungry for more.”

A big reason for that is trailblazers like Morgan, and history could yet again be made by the “nasty left-back” on Saturday.