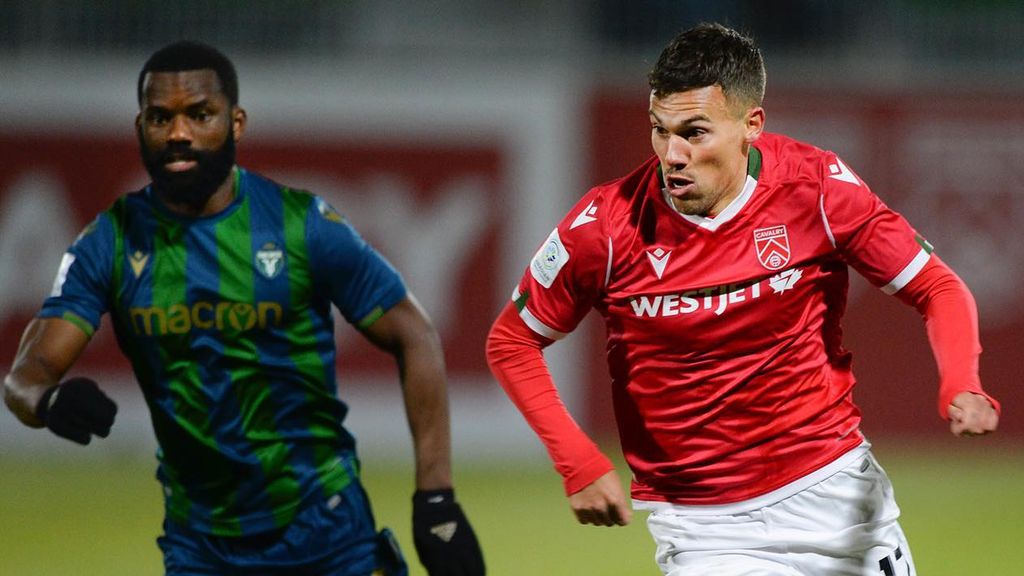 TORONTO – There aren't many Canadian soccer players out there as well-travelled as Ben Fisk.

The 29-year old from Vancouver has played for four of the eight CPL clubs during his playing career, starting at FC Edmonton in their NASL days, then Pacific FC, Atletico Ottawa, and, now, Cavalry FC.

Tonight, Fisk's new team takes on one of his old ones to mark the Canadian Premier League's 300th match - a milestone moment for a player who made history of his own as part of the Pacific team earned the first-ever win in CPL.

Here is a player who has seen Canada from east to west, and gained some unique perspective along the way – unique enough to have us wondering: What's the difference between each stop on his coast-to-coast journey?

"I'm probably the only player who's played for half the league, so it's kind of a fun little fact to carry around with me!" Fisk told OneSoccer, as we reflect on each stop of his journey (so far).

When Fisk played for FC Edmonton, the concept of a Canadian Premier League hadn't yet come to fruition.

Instead? He played in a bizarre league, not quite Division II in the United States, nor with any of the parity we've come to expect from MLS.

"My time in Edmonton was fun, with the likes of Raul, Joe Cole, and Marcos Senna coming to play in the NASL," Fisk recalled.

"We were always up against it, being one of the smaller teams, so it made games funner playing against bigger teams like the New York Cosmos." 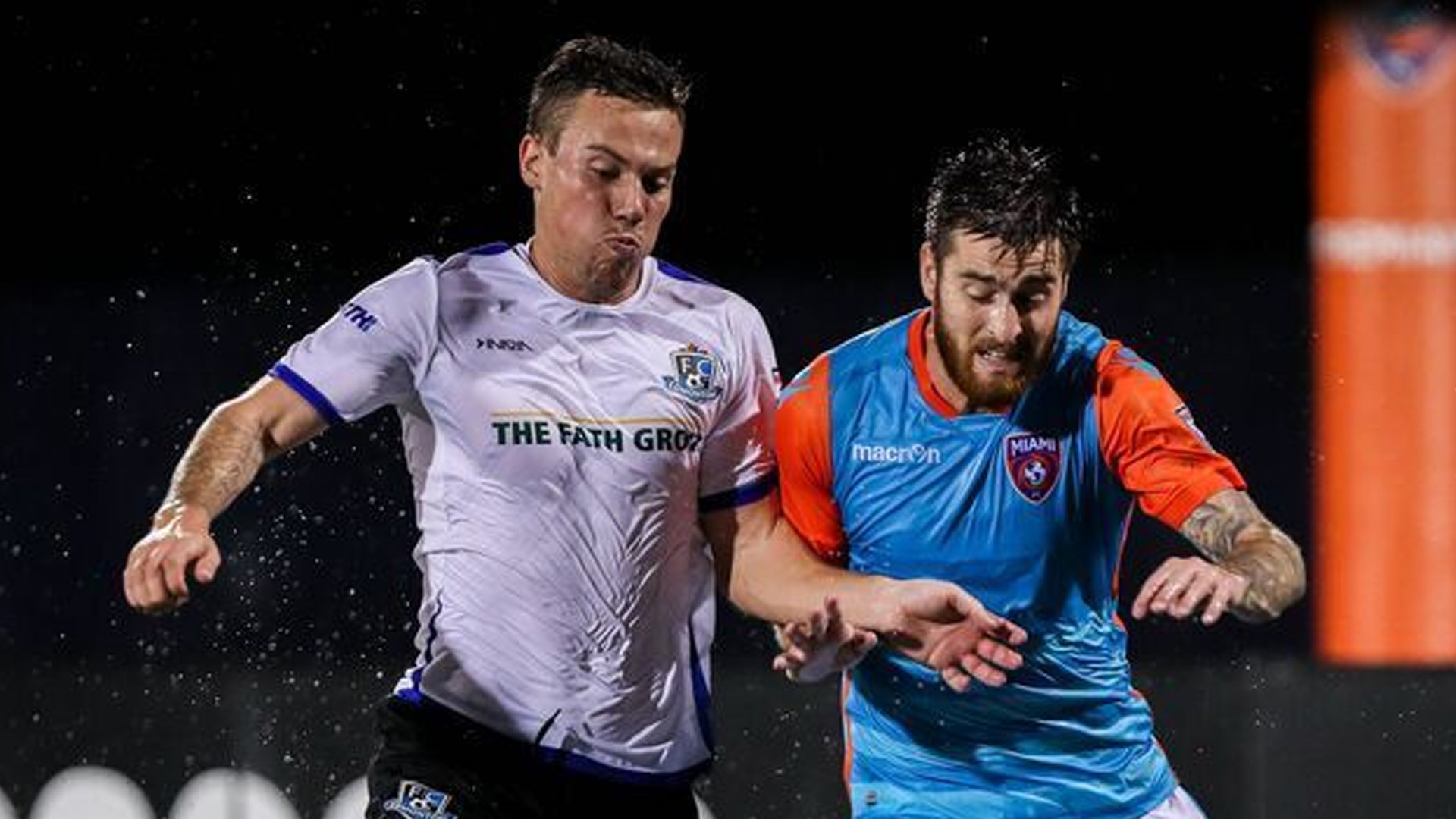 "Still, Edmonton was an exciting part of my career. I got to travel around some great cities around the United States, and made some long-term friends in Mason Trafford and Nik Ledgerwood that I've now reunited with here in Calgary."

Edmonton also paved the way for Fisk to make the jump to Europe.

After a successful season playing with Derry City in 2018, he moved on from the club to look for a new venture ... and a new challenge.

His next destination? Pacific FC of Vancouver Island

Drawn by the allure of playing in the inaugural year of the Canadian Premier League, Fisk returned to Canada and immediately figured into the Tridents' lineup, making 26 appearances and scoring six goals in that 2019 campaign.

"My time in Victoria was incredible,” Fisk said. "I came back from Europe, had just won a title in Ireland, and actually turned down a new contract to come back here and be closer to home.

"It was a big decision for my wife and I, but one that we were really happy to make. And 2019 was so memorable; the first year of the league, and I got engaged, so living on the island was special for us."

While he was a fan-favorite on Vancouver Island, Fisk turned heads as he became one of the first CPL-ers to swap sides, joining expansion team Atletico Ottawa in 2020.

That stop didn't go exactly as planned, though.

"Ottawa is a weird one, because I actually didn't spend a whole lot of time there," Fisk explained.

Fisk was Atletico's first-ever signing, and you can see why they wanted his signature: During the early part of his career, Fisk had played in Spain for Deportivo de La Coruña B and Coruxo.

Naturally, the Canadian international was exactly the type of player they were looking at for a new franchise. Then? 2020 happened.

"We went to Madrid for preseason and a few days into it, that's when COVID hit. That threw a curveball at us," Fisk recalled. "The time I did spend in Ottawa, I loved the city. Unfortunately I didn't get to play in front of the fans there as an Atletico player. That would have been special.

"Still, nothing but good things to say about the staff there. Fernando Lopez in particular, I would consider a friend; he's someone I keep in touch with and wish very well along with everyone involved at the club there."

The captain strikes for the capital at last!@AtletiOttawa are on the board first as Ben Fisk gets his first goal with the red-and-white, giving his side a 1-0 lead over @CPLCavalryFC just past the hour mark!

Now? He's found a home in Calgary with Cavalry FC.

Among the many stops on the road to Calgary, Fisk was missing something important: A show of confidence.

Neither Pacific nor Atletico Ottawa offered him a long-term deal, despite figuring into roles of varying importance for each club.

Earlier this year, Cavalry FC announced that they had re-signed Fisk for the 2022 and 2023 seasons, with an option for 2024.

"This is what I envisioned – I'm really grateful for the opportunity to stay here for at least a couple years." Fisk said.

"With Cavalry I've found a great fit, on and off the field, and a coaching staff that really believes in my abilities and sets me up to succeed."

GOAL 🐎@CPLCavalryFC strike first in this Al Classico clash vs. @FCEdmontonNow as Ben Fisk cleans up a spilled ball in the box!

But home in football means so much more than what happens on the pitch.

On his off days, Fisk has also grown accustomed to his new surroundings, particularly outdoors.

"We’re close to the mountains so we can do a lot of outdoor activities, which are important to me being a B.C. boy," Fisk said, with a laugh.

"I have some family here as well, and my wife is very happy!"

Indeed, Fisk has helped Cavalry reach new heights this season, as the Calgarian outfit sits atop the league standings.

Tonight, his team has a chance to extend that lead, and make history, playing in the CPL's 300th match against his old club, Pacific.

"When I decided to come back to the CPL from Ireland, it's things like this that became a dream,” Fisk told OneSoccer, when asked about the significance of this next big moment.

"I remember in 2019, being part of the first ever victory in CPL history with Pacific FC – that was the first of many milestones. It’s always cool to step back and take note of those things as they happen.”